DomiNations combines traditional real time strategy games such as Age of Empires and Rise of Nations with the more modern mobile genre that is dominated by the likes of Clash of Clans. This unique and fun adventure is available on both iOS and Android. 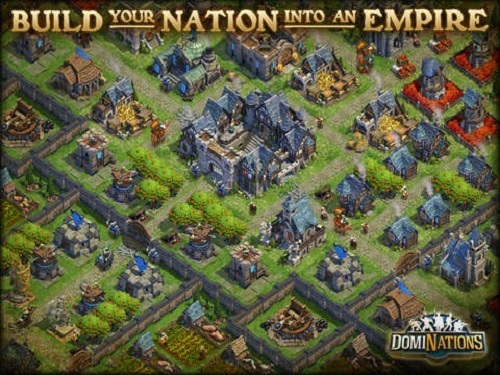 Your overarching objective in DomiNations is to take your small nation from the stone age to the space age and use the various new technologies that become available to dominate your competition.

With 7 starting nations (British, Romans, Germans, Chinese, Greeks, Japanese and French) to choose from the unit variety is well ahead of most other mobile games in this space that might only offer two different factions (if you’re lucky). It’s a nice touch to the game and is particularly noticeable when it comes to building your faction specific wonders and recruiting generals to lead your army (such as Napoleon).

As you might expect starting out in the stone age can be tough work but thankfully players won’t spend too much time in this basic age as it really only serves as the tutorial. During this tutorial players will learn how to harvest the fruit trees spread across the map, hunt animals, explore and expand their settlement, mine gold and attack opponents.

Once you’re armed with these basic game foundations the game quickly takes a step back to put you in control (although there are still guiding quests to point you in the right direction).

This is where the real fun begins as players begin to explore the mechanics that makes DomiNations such an enjoyable experience. From the small waiting times to bonuses for correct settlement layouts (using roads to connect key buildings) and the fact troops not killed in battle will return to your town after an attack is over. 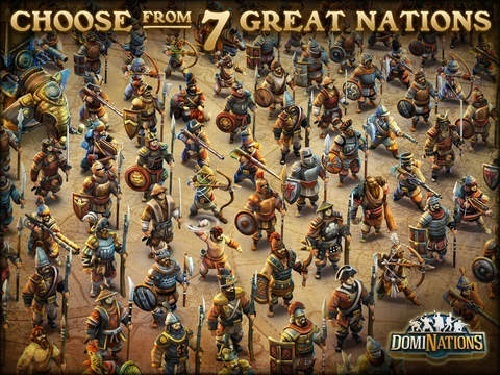 These attacks can take place either in the campaign against computer controlled bases or other players that you intend to raid for resources or on behalf of your alliance. Similar to Clash of Clans players will actively place their units on the map. DomiNations adds plenty of strategy here through good unit diversity and the ability to flag a location for your troops to focus (such as a watch tower).

With a wonderful setting, all the mechanics you could want and some interesting gameplay decisions DomiNations is perfect for any strategy fan looking to jump into the mobile strategy genre or people looking to jump to their next mobile adventure.