If you mixed together hero collecting and turn based strategy into one game the result would be Duelyst, a free to play card game available on PC and Mac that has been around since August 2016. 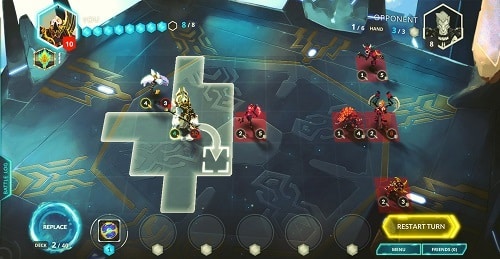 Opting for short matches of around ten minutes Duelyst is a fast paced experience in a strategic genre. Each game within Duelyst plays out on a grid of 45 squares (5 x 9 grid), battling on this field is two player tacticians who will play minions, artifacts and spells out of their custom built deck. Each of which belongs to one of the six game factions that have their own overarching playstyle and generals that have special spells.

Cards are earned through booster packs based on play or can be purchased through real money purchases. Duelyst also includes the standard crafting system of most card collecting titles that allows you to recycle unwanted cards back into new booster packs. Ultimately you’ll select a single general and 40 cards to take onto the battlefield with a limit of 3 for each specific card.

Actual matches start with drawing 5 cards from your customised deck with the option to replace up to 2 cards should you be unsatisfied with your first deck draw. From here players take turn calling on minions, moving their general or casting spell cards with the ultimate objective to bring your opposing general down to 0 health. 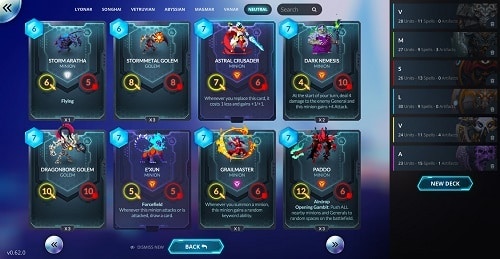 Similarly minions who reach 0 health will be removed from the battlefield although will deal their attack damage value to the attacker before perishing. Other important mechanics to be aware of include drawing cards at the end of your turn (giving you ample time to think) and the replace mechanic which removes one card for another from your deck to use instantly.

Step into the world of Duelyst as you join a sizeable community in the various game modes as you collect cards and build an unstoppable deck of minions.

This review was first published on August 6, 2017. Read our update policy to learn more.