Harvest Moon 3D: A New Beginning is the second game in the franchise for the Nintendo 3DS. For the most part the game is the same as previous games in the Harvest Moon series but there is enough new content that long time fans will enjoy the new adventure. 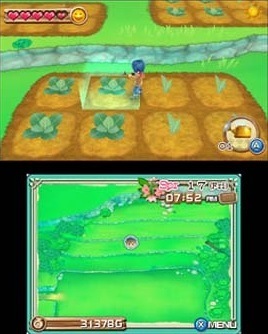 This time around players will be in charge of rebuilding the abandoned town of EchoVillage. With plenty of freedom on how the town takes shape you can create something based on your own artistic tastes and preferences.

For those unfamiliar with the Harvest Moon series the game revolves around players customising their avatar and looking after a run down farm. The farm requires players to choose which crops to plant and livestock to raise which ultimately can be sold for profit. Beyond the farm aspects players will also have to spend their time finding collectible items, talking to the townfolk and eventually pursuing deep relationships with them.

So what separates Harvest Moon 3D: A New Beginning from the many other games that belong to the Harvest Moon series? The most notable change is the players ability to control the development of the whole town rather than just the player and their farm. This opens up an entire new Harvest Moon world to players with a level of customisation not previously seen in the franchise. 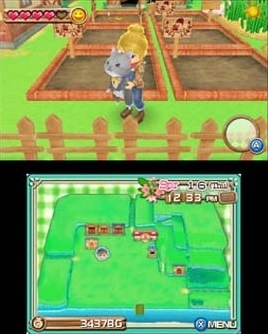 Because of this expansion the number of items in the game world has also been drastically increased so there is no shortage of new items for the player to use.

Newcomers and long time fans alike will enjoy the new beginning to the series that this game provides. The ability to control the wider game world expands the gameplay to a never before seen level and translates to countless hours of gameplay for you.