Ultimate freedom is the objective of Just Cause 3, a game in the open world adventure that continues the over the top destruction opportunities of its predecessors. 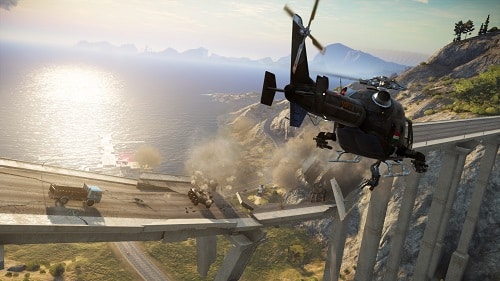 Taking place half a decade after the popular Just Cause 2, the main character Rico Rodriguez returns once again to release an island from dictator control. While your journey is to stop the evil plans of General Sebastiano Di Ravello who wishes to expand his rule to the rest of this world. While this is your main objective there is plenty to get you side tracked.

Set on the large Mediterranean island of Medici (fictional) your available land space is comparable to the previous game but feels much more lively in design. Most notably is the introduction of more vertical space that allows you to both climb mountains and explore deep caverns.

To navigate this fresh environment you’ll have your signature tools from Just Cause 2, the parachute and grappling hook which have been upgraded with better usability. Most impressive though is the shiny new wing suit that lets you glide and with practice even constantly fly. For those seeking other ways to explore you’ll have cars, ships, tanks and planes.

By using these to explore you’ll find side missions in addition to the main story. Primary quests are usually much more destructive in nature, a staple of the series. This isn’t difficult to achieve either with a range of weapons from machine guns, RPGs and even infinite C4.

The infinite element also includes other weapons which while not infinite are fairly easy to call in via rebel supply drops once your wanted item is unlocked, this is a design choice to keep you in the action and achieves this perfectly.

The Just Cause series has always been the go to franchise for crazy over the top action and Just Cause 3 continues the tradition, although it isn’t good for much else.