After a late night party wakes you up and renders you unable to return to sleep you decide to do what any reasonable person would do and go on a serial rampage to end the party. This strange setting is exactly what Party Hard throws you in as you play the role of serial killer, making sure all party goers are eliminated. 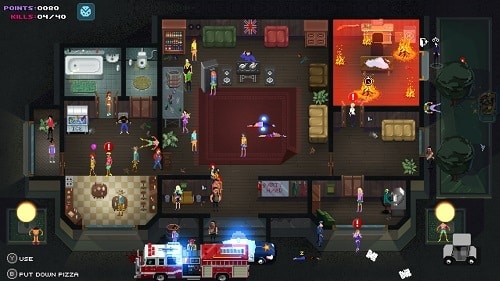 With a total of four different unlockable characters you’ll advance through several levels with a different party atmosphere. From the house party, lonely pub and nightclub your objective is the same, murder everyone in the room without being caught.

As one would expect this is no easy task with randomised maps and events ensuring even the same level can play out differently each time. Not all random events present a new challenge though with helpful random encounters such as salesmen willing to sell you items or briefcases with hidden goodies.

To achieve your objective players will rely on their knife, smoke grenades, stun bombs, bombs, poison and a number of environmental elements that can be deadly when activated. Players can’t just rampage though as if spotted by another party goer killing someone they’ll soon have cops taking them away. 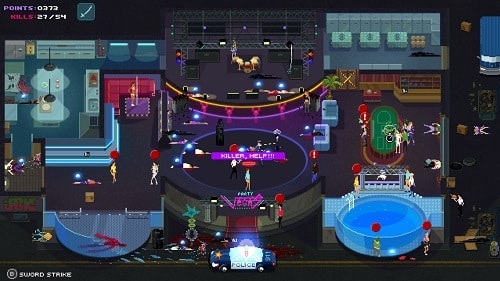 This turns Party Hard into a game of carefully analysing the actions of the people at the party and planning your attacks against single targets or sometimes if carefully planned multiple people. With only a single screw up undoing lots of hard work Party Hard is not a a game for the faint hearted.

The dark humour and stealth action of Party Hard is no doubt unique and innovative. The whole thing can quickly break down to a game where you simply wait for people to leave the main room though, rather than plotting some elaborate trap to be sprung.

Games Finder is a Steam Curator and featured in the aggregate review scores data of MobyGames and Neoseeker.
FEATURED ON
Games Like Hitman, Games Like Yandere Simulator
LEAVE A REPLY Cancel Reply