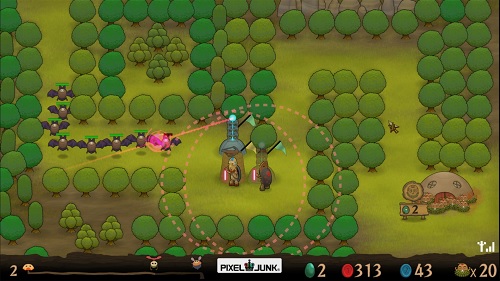 The gameplay in PixelJunk Monsters is fairly similar to other titles in the genre with players building up their defences using a variety of towers at their disposal. Enemies will enter the map from a single or multiple points and attempt to make it to the end of the path (to attack your base) without dying to your defensive placements.

The core element of gameplay in PixelJunk Monsters is very different from standard tower defence gams though. Instead of overseeing the game players are instead in control of a character on the ground that must run around to build the necessary towers and collect the coins that are dropped from enemies.

In PixelJunk Monsters towers come in a variety of forms with each having their own strengths and attributes. Combining them together to make a powerful defensive grid is important to your overall success in each level. Some towers are better suited for long range attacks, countering air units or slowing down large enemy assaults. For every kill you’ll gain some coins to build more structures, research new ones or upgrade already built ones. 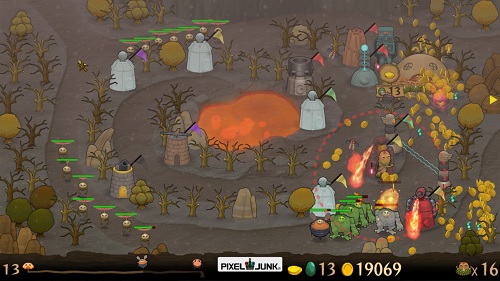 The game offers a good number of levels with over 20 in the original game and nearly 40 with the games expansion pack. PixelJunk Monsters also uses a trio difficulty model giving players 3 very different difficulties to tackle each level on. Additionally players can participate in challenges for an extra challenge.

The level of polish and variety is what helps PixelJunk Monsters stand out against similar games and the unique character control mechanic is a nice change to a sometimes stale genre.