If side scrolling beat’ em ups don’t provide enough of a challenge for you anymore then the randomised and rogue-like elements of Rampage Knights may be the experience you’re after. 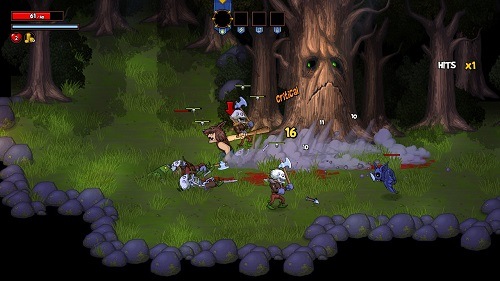 Designed to be playable alone and with friends players take on the role of hero trapped in a dark magic forest. Directed towards the ruined castle in the distance players encounter all sorts of dark creatures such as goblins, skeletons and strange shadow beasts.

With every attempt offering a new random experience you’ll encounter different layouts, items, enemies, traps, encounters and spells in each game, encouraging plenty of replay (and death depending on how lucky your run is). This level of variety also extends to visual customisation which can be easily changed before each run through the hilarious Igor’s Travelling Surgery merchant who joins other merchants at your starting hub.

Actual combat in Rampage Knights is very solid with fluent slashes, stabs, throws, uppercuts and spells forming the base of your experience. This pairs up with 6 classes that are unlocked as you complete certain achievements. Classes include the Adventurer, Barbarian, Pirate, Assassin, Warlock and Battle Mage which alters thins like starting health, run speed, weapon and ability, which gives off a very Rogue Legacy sort of vibe. 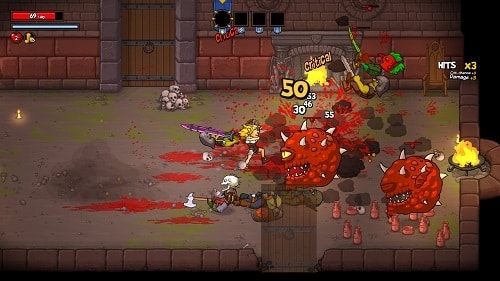 This class structure really shines in the multiplayer component (online or co-op) where you can cover for each others weaknesses and split loot accordingly. You’ll also be able to venture further with the resurrect mechanic of the game that has you turning into a useless ghost (capable of dealing 1 damage) while you collect souls of fallen enemies that your alive party members kill. Given the always on friendly fire you’ll be relying on this more often than not.

Rampage Knights manages a good balance for single player and co-op which few games in the genre achieve. While that alone would be reason enough to consider it the rogue-like, randomisation and sheer hilarious moments make it hard to pass on.

Games Finder is a Steam Curator and featured in the aggregate review scores data of MobyGames and Neoseeker.
FEATURED ON
Games Like Castle Crashers, Games Like The Binding of Isaac
LEAVE A REPLY Cancel Reply