Advance Wars: Days of Ruin (alternatively, Advance Wars: Dark Conflict) is part of the well-loved turn based strategy series, Advance Wars. It’s the formula that fans have seen before albeit with a darker tone and a greater selection of units that takes the strategy options to the next level. 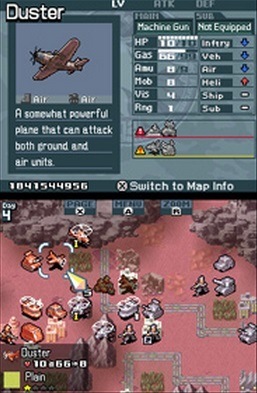 The setting for this strategic adventure is a post-apocalyptic one centred on the Rubinelle 12th Battalion one of the last remaining military forces of the country. In the shadow of a war against their long rivals the Lazuria, a devastating meteor shower, a potent disease and a mysterious faction you’ll have quite the story to sink your teeth into as you use your military strategy.

The core gameplay stays true to the series with the player relying on military units to defeat their enemy. While some of the campaign missions require you to chase after specific objectives the majority of battles will end with you defeating all opposing units or capturing their headquarters. In order to do this players will need to command their troops across the grid based map while building structures. With battles taking place over the usual land, sea and air terrain the battles are anything but dull in Days of Ruin.

CO powers return to the franchise although they have been significantly adjusted to be less of factor in your victory. They definitely still play an important role but aren’t the devastating moves you would have experienced previously in the franchise and by unlocking them much later in your adventure you’ll get a better progression curve from the experience. 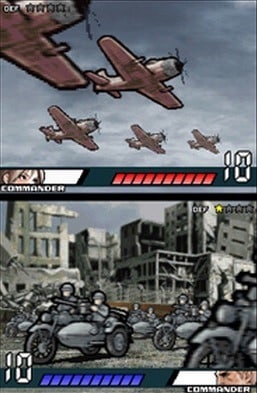 Mechanically CO units still work in the same way to previous Advance War games with them being joined onto a unit which activates the CO zone around said unit, providing small boosts to stats and slowly growing as units deal damage within the zone. While most of your favourite core units are there Days of Ruin does add a few extra options and renames a handful more. You’ll also have a few extra terrain types to work into your strategy although it’s nothing overly innovative featured here.

For simple but enjoy militaristic strategy Advance Wars: Days of Ruin has great appeal to long time followers or newcomers wanting to see just what the Advance Wars series is all about.