Advance Wars: Dual Strike belongs to the popular Advance Wars franchise and is available on the Nintendo DS platform (and eventually the Nintendo Wii U) with the series long being a Nintendo staple. Taking place in a fresh location but continuing on from previous games Dual Strike is the ideal Advance Wars game for fresh faces to join the franchise but has that extra appeal for long time fans with just the right balance of familiar mechanics.

Set in Omega Land two new characters join the Dual Strike team (Jake and Rachel) who are the main protagonists for your adventure. While they are joined from time to time by other characters from the previous games they are brought into the fold in such a way that first time Advance War players won’t feel out of the loop. At the same time this ensures adequate fanfare for the long time followers of the franchise as these faces walk onto the battlefield. 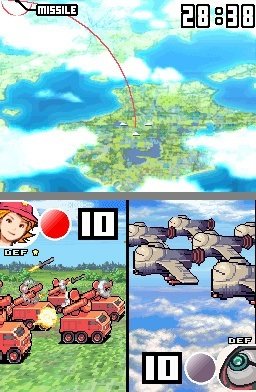 These commanding officers (CO) also provide a wealth of strategy in their own right when taken into the multiplayer arena as they offer strengths and weaknesses in combat. Be it Hachi that offers units at 90% of their normal summoning price or Sensei that provides all transport units an additional one movement that is vital for the larger maps.

Standing at the other side of these various battlefields is another familiar face with your usual nemesis The Black Hole Army returning with a new commander at the head, Von Bolt. Similar to your own team he is joined by both fresh and old faces as you battle to defeat him across the story campaign with each introducing new challenges.

On the gameplay front you’ll find 28 campaign missions to test your military tactics ensuring there is more than enough content for several afternoons worth of steady and methodical tactical play. Advance Wars: Dual Strike changes the formula little from previous successful instalments but definitely makes some small refinements that fans would appreciate. One of the most notable new features in this regard is the dual front battles that require you to fight on two fronts at once to push your strategic thinking up one more level and are tired of the plain old single sided battles. 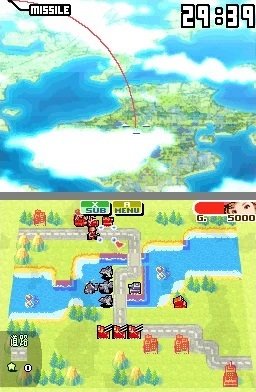 Core elements from a mechanical perspective have changed little though with players capturing points on the map, moving troops around on a grid like battlefield and various terrain elements (forests, mountains or cities) requiring careful planning to navigate around or serve as useful places to hold position due to the better defence offered.

The progression curve is also tightly packed together which ensures that more often than not you’ll have a new toy in each level be it a unit, skill or trait. This has particularly been a strong point of the franchise and is no different in Advance Wars: Dual Strike adding vital changes between each battle to alter the core experience. 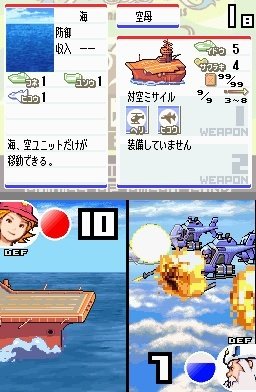 In total Advance Wars: Dual Strike includes 26 units across land, sea and air with 7 new to the franchise being aircraft carriers, black boats, black bombs, mega tanks, oozium, pipe runners and stealth bombers. Aircraft carriers for example allow players to carry two flying units to launch deadly aerial based attacks from sea while the black boat can be used to repair and restore supplies to said carriers or your other naval vessels.

Advance Wars: Dual Strike is much more than just its campaign mode though with a map editor, a huge range of challenges and local multiplayer to add much more content for those that want to take the gameplay hours even higher or fight against their friends to prove themselves as the better tactician.