AdVenture Capitalist! belongs to the incremental video game genre with players playing the role of a capitalist as you invest funds, unlock new opportunities and much more. 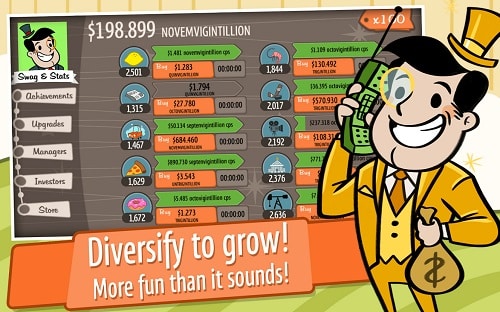 Available on a wide range of platforms AdVenture Capitalist! has captured a wide audience for its simple but addicting gameplay. In the game players start by manning their own humble lemonade stall which will earn a profit for players every few seconds provided they activate the process. From here you’ll earn a couple of dollars to upgrade your stand which will boost the revenue generated and with enough levels increase the speed in which income is generated.

Using these early profits players can quickly expand their operations to newspaper stands, car washes and eventually an oil company. Managing all these companies can be difficult though which is where managers come into the equation, allowing you to invest some of your hard earned cash into each business so that it passively generates funds for you.

AdVenture Capitalist! doesn’t limit players to the Earth either with expansion opportunities on the Moon and Mars when players have collected 1 trillion Earth dollars and waiting a further 200 hours. This process can be made significantly faster though with the investment of the other games currencies such as angel investors, mega bucks and gold which can be created in a variety of ways and come with their own benefits. 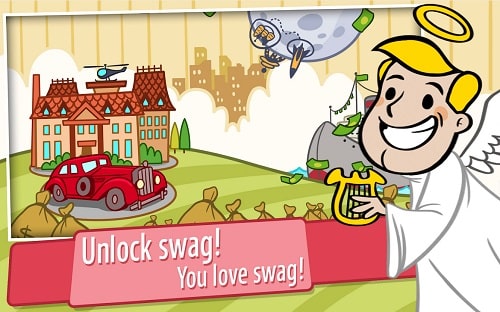 With over 600 unlockables to boost your income, a great simplistic design and game resets you’ll be investing plenty of idle hours into AdVenture Capitalist! in order to tell your friends that you’ve unlocked it all.

Capitalise off the beauty of capitalism in AdVenture Capitalist!, a high quality incremental idle game with plenty of character.

This review was first published on December 26, 2015. Read our update policy to learn more.

Games Finder is a Steam Curator and featured in the aggregate review scores data of MobyGames and Neoseeker.
FEATURED ON
Games Like Candy Box, Games Like Cookie Clicker
1 COMMENTS
LEAVE A REPLY Cancel Reply