Created by Matheus Valadares Agar.io is the original io game. Giving birth to the massive io genre that revolves around consuming smaller cells to grow larger Agar.io is still one of the most densely populated games, ensuring a fun and fast game experience. 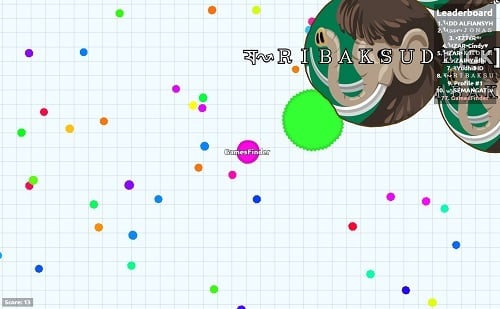 Starting as a browser game and now also available on iOS and Android Agar.io takes place within a petri dish sized map and challenges players to grow as much mass as possible. To achieve this players guide their coloured cell across the map eating up smaller cells. While easy enough to achieve when there are no players around to stop you, the popularity of Agar.io makes it much more difficult in practice as thousands of players are fighting over the same limited resources.

Mechanically players move their cell using the mouse, players can also split their cell with force or break up their cell which can be used both offensively and defensively. A players game ends when a larger player controlled cell eats them. While the game does have size limits, the walls of Agar.io do not kill the player. A match results screen after each death summarises the food eaten, other cells eaten, time alive, highest mass, leaderboard time and top position. 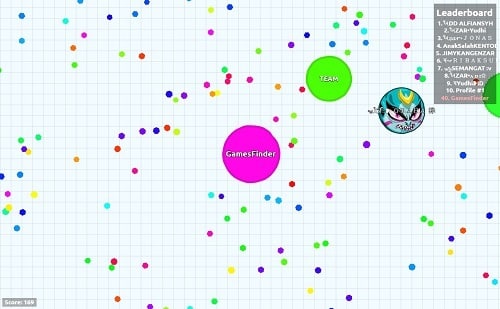 Game types include free for all, teams, party and experimental which all offer the same core experience while altering the rules slightly for varied gameplay. Additionally players can spectate the largest cell to get an idea of what they are currently facing.

To keep you coming back to the cell infested world of Agar.io customisation is delivered through skins that you can purchase with coins. Coins can be bought, provided when you level up or watching videos/completing offers.

This review was first published on August 2, 2016. Read our update policy to learn more.

Games Finder is a Steam Curator and featured in the aggregate review scores data of MobyGames and Neoseeker.
FEATURED ON
Games Like Slither.io
LEAVE A REPLY Cancel Reply