Agent, Run! Is a 2D endless runner that introduces some interesting mechanics to offer a compelling free Android runner app. Perfectly suited for fans of this addicting genre wanting something with a bit more challenge and a bit more gameplay variety that give you a sense of progression as you master the game mechanics of Agent, Run! 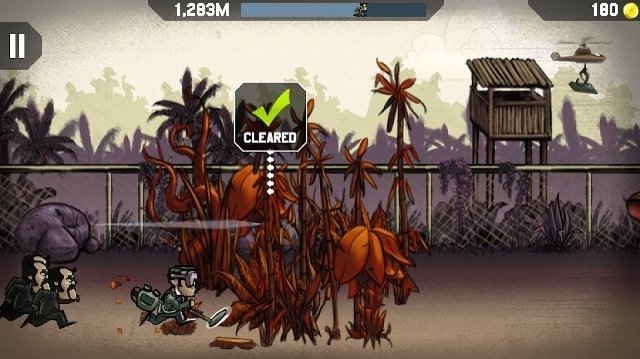 With a simple back story Agent, Run! sets players running through up to 4 levels as a secret agent attempting to save the world (while being chased by henchmen from an unknown evil mastermind) the game doesn’t hesitate to get right into the gameplay and like many endless runners in the genre opts to teach players through a baptism by fire approach where every mistake is a learning experience (and they come quickly). In order to unlock all 4 levels players will have to purchase the full game through an in-app purchase with only the first level available for free though unfortunately which limits the amount of enjoyment that a free player can attain.

Players aren’t entirely left to their own devices though with a basic but effective tutorial in your very first run providing a framework for your growth from reaching 50m to reaching 5,000m. Where the unique elements of Agent, Run begin to shine though is that unlike more traditional endless running games where your focus is on dodging obstacles by changing lanes or jumping Agent, Run! focuses instead on having you clear a safe path for your agent through a wealth of situations. 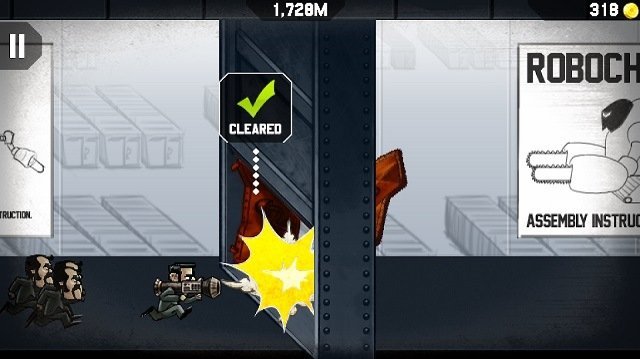 This requires you to give the guard dogs a bone for example, smash open blast doors that block your path, jump over large gaps, cut down thick vines and more. Each of these actions requires something different from swiping to open up a door, to holding down a springboard to launch you over a gap or cutting a rope to drop a bone for the hungry guard dog below. Doing these quickly in the moment when multiple of these situations are thrown at you sequentially is where you’ll quickly trip up (literally) and have the henchmen catch you, ruining any chance for escape.

While your first couple of obstacles are spaced a fair distance apart you’ll quickly have multiple obstacles to deal with at once as you get above and beyond the 100m mark. This makes Agent, Run! one of fast reactions and also memory as you have to remember the correct action to destroy that tree log swinging towards you before it makes contact and all the other situations that you’ll encounter with their diverse counter actions and swipes. Every time you fail to overcome one of these obstacles the henchmen behind you will gain some ground and eventually catch up with you completely after a few falters. 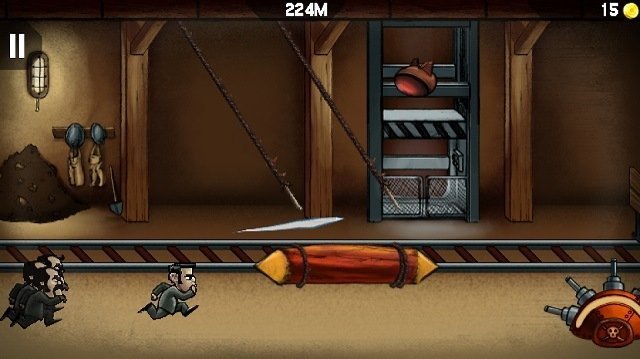 To keep you hooked Agent, Run! offers coins to collect and missions to complete with each individual run attempt. Missions range from reaching a set distance, collecting a certain number of coins or completing a specific action which fans of endless runners would recognise from other similar titles in the genre. Once a mission is complete you’ll get a star to improve your rank and receive a replacement mission to ensure you always have 3 available to focus on. While coins are used to purchase equipment for certain obstacles or one of the available game boosts (such as skipping the first 200m or getting a second wind), Agent, Run! unfortunately lacks any sort of visual customisation that other endless runners offer which hurts the coin progression feature somewhat.

Agent, Run! is a nice change from other endless running games out there and if you’re seeking a challenge it definitely provides one with its obstacle reaction approach and the removal of lane based gameplay. While the presence of only a single free level might be annoying the lack of other in-app purchases or ads makes it a reasonable trade off.