Algodoo is a physics and simulation tool intended to offer a sandbox experience that straddles the line between learning, gaming, animation and even engineering. Alogdoo is the second iteration of the software and built on the success of a previous similar software under the name Phun.

Around since late 2009 the only limit in Algodoo is your own imagination and curiosity with the game encouraging you (and providing all the requires tools) to create all sorts of fun inventions using realistic physics. 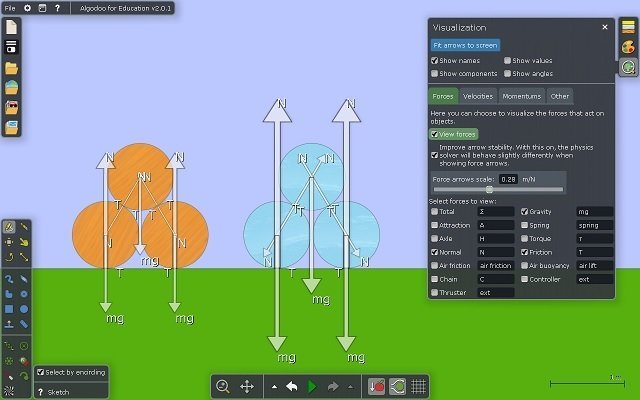 Algodoo is set in a simple 2D sandbox environment which serves as your own virtual sandbox where players can learn about a range of physics applications such as the relationships of mass, velocity, momentum and gravity. Algodoo is marketed as an educational tool and has plenty of obvious educational benefits but is also simply a tonne of fun just to mess around with for a few hours to watch the interactions of real life physics.

If you’ve previously tried Phun you’ll find the experience familiar with all the features that made Phun an extremely popular sandbox experience included. However, Algodoo expands in a number of areas pushing the game to the next level with improved optics modelling and a snap to grid feature that makes connecting your creations together much easier than Phun.

The tools of Algodoo are your connection to physics world within it and in total there are nearly two dozen tools to use, test and master. This includes basic tools that provide the functionality to create shapes such as squares, gears and circles. With other tools allowing players to add functionality these simple shapes with gravity, springs, magnets and all  sorts of other forces that let you create and test your inventions.

With the tools you can create things like human catapults, rockets, crumbling buildings or setup a series of systems to take a ball from one end of the screen to the other in a domino like fashion. Using these tools is simple once you understand all the different options you have at your disposal and supported through a clear user interface. 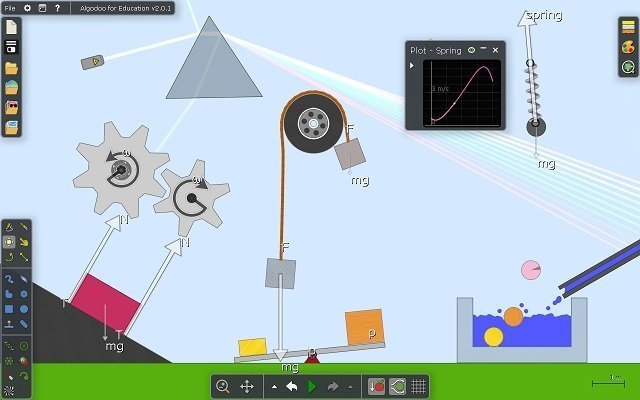 Like most sandbox games in this genre Algodoo thrives on the ability to be able to share content and creations to inspire others. While many users take to the likes of YouTube to share their awesome creations players can also use the file sharing service built into the game so that you can explore what other people have created and learn from them. With tens of thousands of user created content items it’s easy to get lost just playing with what others have created and also the fastest way to learn.

If you’re creatively minded and want a game that gives you a huge amount of freedom in a physics environment you’ll be able to spend hundreds of hours in Algodoo making your own creations and sharing them with the community.

This review was first published on November 15, 2013. Read our update policy to learn more.

Games Finder is a Steam Curator and featured in the aggregate review scores data of MobyGames and Neoseeker.
FEATURED ON
Games Like GMod, Games Like Roblox, Games Like Transformice
LEAVE A REPLY Cancel Reply