The Angry Birds franchise combines with the bubble match genre in Angry Birds POP! a game that integrates the mechanics of both into a high quality mobile title and familiar Angry Birds characters. With a healthy amount of downloads across both the iOS and Android platform Angry Birds POP! Is one of the more popular titles in the bubble popping genre which means players can expect to find regular events and new levels (currently over 4,000) with regularity. 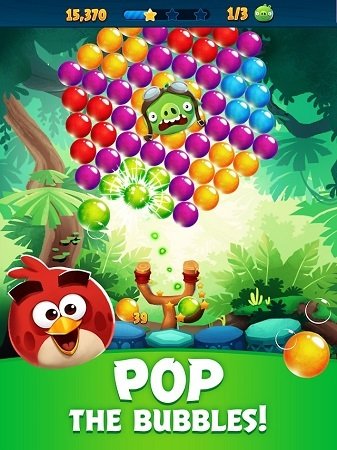 While it’s a similar experience to other bubble popping games Angry Birds POP! gives every element an Angry Birds skin from the trusty slingshot that sits at the bottom of your screen while in game to the pig and bird characters that are littered throughout the core gameplay. Most notable of which are the green pigs which are trapped within the maze of bubbles atop your screen and can only be free if players match the various coloured bubbles.

If you’ve played a bubble popping game before you’ll likely fit right into this mobile title and steam through the first dozen odd levels which offer basic designs and intended as an extended tutorial. For those unfamiliar with this hit mobile genre you’ll be required to fire coloured balls from the bottom of the screen up to the top of the game area where matches of 3 or more will pop the bubbles and in turn remove them from the game entirely along with any bubbles connected underneath your match. 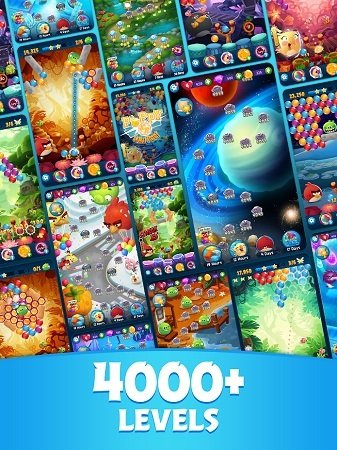 In Angry Birds POP! this is achieved through a simple flick of your finger on the screen with the ability to see an outline of the intended path by holding your finger down, which is vitally important on this precise shots and wall bounces. While simple in principle the genre allows for the skilful and thoughtful player to shine with careful bubble placement clearing the game area faster or instead capitalise on streaks of matches with come with their own benefits.

In addition the fundamental drop the pigs game mode (played as Red Angry Bird) players can also enjoy a piggy in the middle game mode, free the hatchlings, beat the clock and pop up the top that require you to clear the game board, free Angry Birds instead or achieve other objectives. Each game is tied to a different bird from the Angry Bird franchise who also comes with their own special pop attack from creating streaks of bubble pops (6 in a row required). 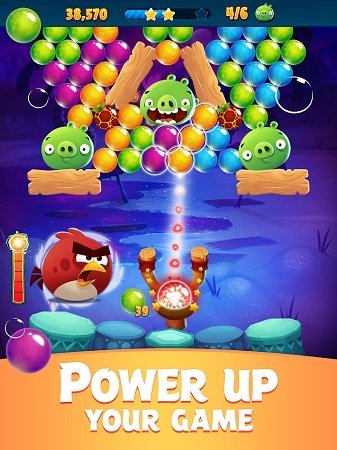 Just like the original Angry Birds game and the various franchise adaptions since in other genres players can expect a high degree of polish in Angry Birds POP! from the presentation to music and even quests that encourage you to keep popping bubbles across a mind bending number of levels.