In terms of fleshed out MMO experiences ArcheAge is near the top of the list with an impressive game world filled with adventures, secrets and features around every corner of the fantasy world. While ArcheAge innovates in a few areas of MMO gameplay much of the focus is put towards delivering vast content, quality and player choice over attempting to reinvent the historical MMO mechanics. Set in a fantasy game world the focus of ArcheAge is on being able to change the game world around you while being free to pursue your own path of progression which is why ArcheAge is often considered to be a sandbox MMO. This is achieved primarily through a rich player housing system and a class free style system that lets you dabble in multiple skill trees as you mix and match your favourite active or passive skills (while ensuring re-specialisation options are abundant). For the flexible player afraid of commitment to a single class or archetype ArcheAge caters perfectly towards your MMO desires.

To begin your ArcheAge adventure players select from the six game races; Elves, Nuian, Firran, Harani, Warborn and Dwarves which evenly disperse themselves across the two game continents and have their own backgrounds, visuals and early game mounts. Alliances between these races are complex and fluid with some hostile matchups present alongside other lore connections. Like other big name MMO adventures ArcheAge includes gender options alongside further customisation (most notably facial shaping) which results in a unique avatar for you to control.

While the choice of your race does have an impact on your race abilities these unique traits (two per race) are not game breaking and include improved swimming speed to reduced construction time, fall damage resistance, improved recall and transformation abilities. Further depth is compounded on top of these base race traits through the skillset system which offers a potential 11 playstyles (although only 6 are available at character creation) with the usual MMO archetypes. At any time players may mix a total 3 skillsets which creates 165 possible combinations each with their own unique class name derived from the combination selected. This system allows players to mix healing, stealth and archery together to create the “Ranger” or power attacks, occult and songcrafting for the “Lorebreaker”. While there are always meta builds like any other MMO, ArcheAge does not shy away from offering choice and allows players with theory crafting tendencies to potentially lead a new meta.

Actual combat stays true to the traditional MMOs with gameplay that revolves around your skill bar and combos for maximum effectiveness. While the combat in ArcheAge does use tab targeting it also allows for movement while casting most abilities to allow for positioning to play more of a role and generally feel more engaging.

Unlike other MMORPG adventures where anything outside of the main game world and combat feel like tacked on extras ArcheAge does a wonderful job of giving you additional content that isn’t included just for the sake of it, ensuring the world mechanics feel connected in a logical fashion. 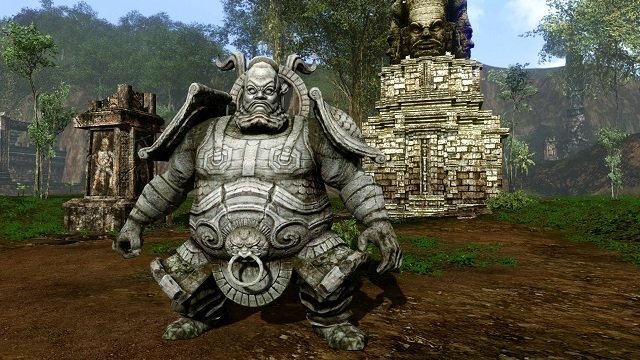 For ArcheAge this means property ownership, trading, crafting professions and transportation systems that pack a wealth of content and variety. In terms of property ownership for example not only do players have access to typical houses they also gain access to farms and even castles through guilds that offer various in game benefits. Meanwhile you’ll find 22 professions of which only 2 can reach the maximum rank allowing players to create a niche expertise for themselves within the community.

For vast MMO content and quality across the board ArcheAge goes beyond the minimum requirements of a MMO universe. The added sandbox elements in particular ensure there is strong appeal to players that like to spend their downtime away from core combat.

This review was first published on December 29, 2014. Read our update policy to learn more.