Despite its name Assassin’s Creed III is actually the fifth core game in the popular history based series. The game was released in 2012 and offers the same action and adventure mix as the previous games. 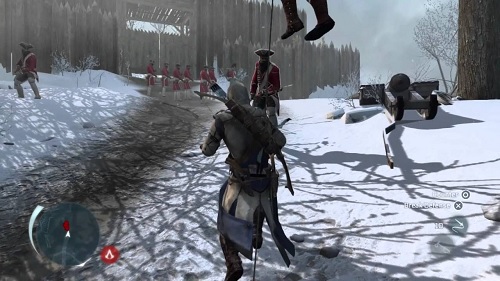 Players familiar with the series will recognise the Animus machine that allows players to relive memories from their ancestors. This time around Desmond Miles will hop into the Animus machine to find a method to stop the upcoming apocalypse. The journey takes him to the 18th century and the American Revolution.

Just like the previous instalments players are free to roam the game world as they please with exploration making up a large portion of the gameplay. Locations in Assassin’s Creed III include New York, Boston and the American Frontier (a huge area of wilderness). In these areas players will follow the main story, accept side missions, engage in combat and sneak around in the shadows.

The game isn’t just a previous Assassin’s Creed game with an 18th century skin thrown over the top though. Assassin’s Creed III has done a good job of introducing new elements into the core gameplay including dual wielding and the ability to hunt. Players will also find a more fluid movement system to create a more parkour feel and an ever changing weather system which impacts gameplay by altering visibility and player movement.

For players that prefer to experience the game with their friends a new co-operative multiplayer game mode known as Wolfpack lets players (up to 4) take down certain NPCs within the allotted time.

The Assassin’s Creed series just keeps getting better and even after the fifth game release shows little signs of running out of ideas. This fifth release in the series is as good a place as any for newcomers to hop on the bandwagon but also has plenty for long-time fans.

This review was first published on May 7, 2014. Read our update policy to learn more.