The Assassin’s Creed franchise continues its historical based adventure series with the 2014 release in the series called Unity. Taking players deep into Paris to play a key role in the French revolution players will explore the DNA memories of Arno Dorian as they unravel the true story and motives behind the famous historical revolt. While Unity pushed the limits of hardware of the day to deliver it’s stunning graphics the age of the title now puts it in easy reach of modern hardware. Arno’s story in this addition to the Assassin’s Creed franchise spans 5 years beginning at the eve of the French Revolution in 1789 and ending in 1794 and explores other elements of the Frenchman’s life along the way. This life sees players on a redemption arc to avenge the death of their adopted father while raising the ranks of the familiar Brotherhood of Assassins, uncovering additional murder plots and falling in love with a member of the Templar.

As fans of the previous titles would expect the game features a blend of fiction and non-fiction which are woven together to craft the story adventure before you. This includes shifting between the historic memories and present day in addition to exploring time anomalies that explore other key eras of French history on a smaller scale, including World War II. While the story of Unity is far from the greatest story to grace the franchise it definitely isn’t the worst fans have experienced to date. Assassin’s Creed Unity will hold your attention throughout although at times you do feel like there was a missed opportunity to explore the rich history of the French culture. 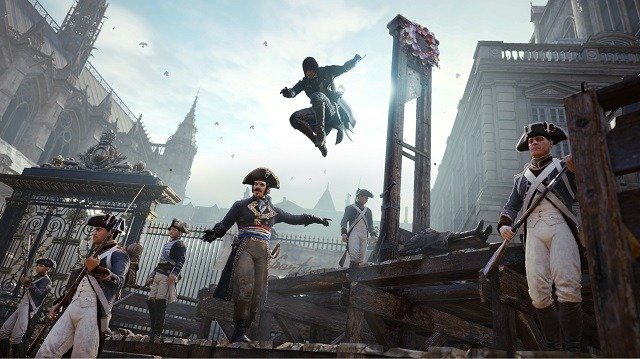 Many mechanics in Unity have been redone or reinvented to ensure gameplay mechanics feel fresh for even Assassin Creed veterans who have defeated the assassination challenges across the franchise to date. Players who enjoyed the free form planning of the original Assassin’s Creed in choosing the path to their assassination will be particular pleased with the return of this design choice although escape is now a key requirement of your assassination which ups the overall difficulty.

From combat flow to parkour movement and even how players interact with crowds in Paris it’s obvious that time was invested in improving these core features. For combat this means that counter kills are no longer a factor which forces places to be more tactical in each engagement and not rely on an easy counter that ends the fight and makes all the enemy variants require different approaches as intended. While for parkour long gone are the wealth of easy rooftop descents (e.g. haystacks) in favour of giving the player greater control and choice for their free running and building descents. Crowd interaction in particular though makes the game feel more alive with crowds constantly presenting activities to the player (which you can engage in or ignore) from bringing a thief to justice or stepping into a fist fight. Overall the general flow and pacing of the game isn’t far from the previous franchise instalments with quests, exploration and side quests filling up the rest of your time in the gorgeous French city. 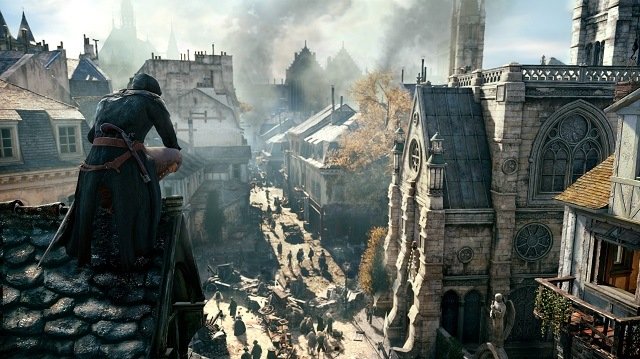 The two best additions by far though in Assassin’s Creed Unity are the new co-operative multiplayer and introduction of a skill tree, two things that have been absent from the franchise previously. With the new skill tree players can now define how they want to play with options to develop 25 skills in stealth, ranged attacks, health and melee categories with experience that you’ve earned for your actions. Most of these skills unlock new abilities for you such as the Double Air Assassination or Staggering Strike while the remainder offer improvements to your base abilities or statistics like lockpicking and health. Further customisation and progression in Assassin’s Creed unity is achieved with hundreds of equipment pieces of hoods, robes, blades, belts, pants and boots that give you stat or utility boosts while providing the opportunity to define your intended assassin playstyle.