Explore the skies and create your own universal empire in Astro Empires, a simple browser based game full of depth for those that are willing to put time and effort into the adventure. 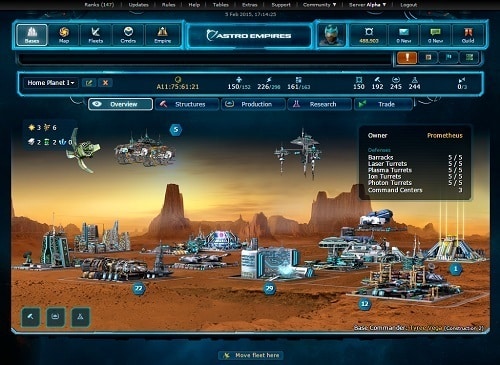 Played from your browser anywhere in the world the Astro Empires universe runs in real time. The game constantly has multiple servers running at a time with new servers proving to be the most exciting as players race to gain an early foothold. Each server varies in size but generally attracts several thousand players with often over a thousand players online at a single time.

This is where new players will want to focus their attention in particular as newer servers are less over run with veterans or players that have already had significant time to build up their bases and fleets. Despite the large number of veterans though it isn’t difficult to jump into the community as a new player on a new server with plenty of guilds happy to take you under their wing and boost their guild presence in the process.

Basic gameplay doesn’t deviate from your typical browser MMO strategy experience with players focusing on high level strategy and efficient use of resources. This is achieved by claiming planets, building bases, developing your population, producing fleets of spaceships and improving your technology. 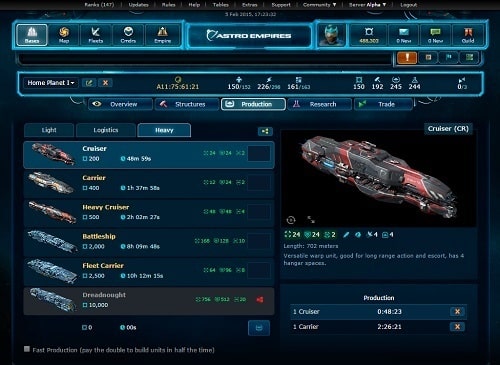 All of this is accomplished through various screens in a similar manner to OGame or Travian with limited graphical elements (although the new Astro Empires version 2 servers are moving towards a more visual experience).

With its good community and recent move to a more graphic based user interface Astro Empires is likely to keep growing and be around for another decade. Fans of the browser strategy genre would be well advised to check out what Astro Empires is offering in a niche with few space themed options.

Games Finder is a Steam Curator and featured in the aggregate review scores data of MobyGames and Neoseeker.
FEATURED ON
Games Like OGame, Games Like Travian
1 COMMENTS
LEAVE A REPLY Cancel Reply