From the same development team that brought you the exceedingly popular Castle Crashers, Battleblock Theater employs some similar mechanics while being just as wacky. Originally for Xbox 360 with a Steam release approximately a year later Battleblock Theater is also on the Xbox One backwards compatibility title list. 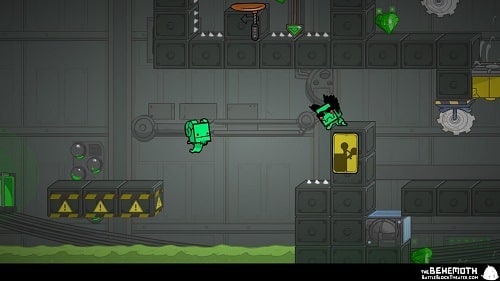 The story of Battleblock Theater is told predominately through stick puppets and begins with players boarding the S.S. Friendship which finds itself in a heavy storm and shipwrecked on a strange island. With the crew of the ship being held hostage by the cats that rule the island players are forced to entertain these felines through deadly games and challenges which in turn unlocks extra playable characters. As events unfold the challenges become increasingly difficult, requiring more team work and forethought.

The primary mode of Battleblock Theater is the adventure mode which sees solo players or teams overcoming obstacles to reach the exit. The control scheme of Battleblock Theater ensures that anyone can pick it up and play straight away with controls orientated around jumping, running and attacking. The main mechanic you’ll have to overcome in each level is the different block types and how they interact with you reaching the level exit and obtaining the gems and yarn balls. 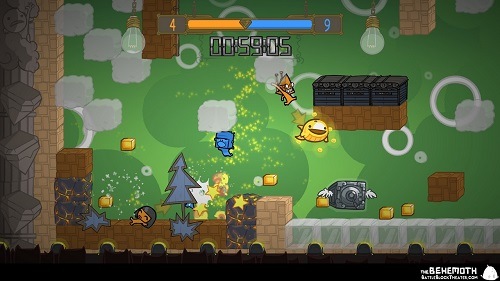 Blocks include things like sticky walls, spikes, bouncy rocks and collapsing ones. A number of environmental hazards such as water and enemies also show up from time to time. Often players will need to throw each other across wide gaps, lend a helping hand to scale or wall and much more to conquer the level.

To help let of steam when you’ve had enough of your friends letting you down the game also includes an arena mode for competitive gameplay. With over half a dozen options here it’s a great way to extend the life of the game and have some laughs. Further gameplay can be obtained through time attack mode and the level editor.

Games Finder is a Steam Curator and featured in the aggregate review scores data of MobyGames and Neoseeker.
FEATURED ON
Games Like Castle Crashers, Games Like Overcooked, Games Like Transformice
LEAVE A REPLY Cancel Reply