Combining idle clicker gameplay with the beat of music is Beat Bop: Pop Star Clicker, a free to play game for your iOS and Android devices. Your task is the taptastic world is to shred some cords, manage your economic growth and take yourself from busker to superstar. 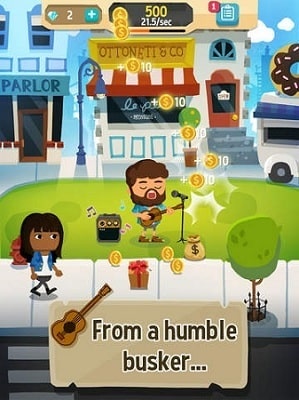 Players start on their quiet home town streets with a basic guitar in hand while you go through the basic operations of the game. Similar to other games in this genre you’ll need to tap the screen in order to accumulate coins with bonuses when you fill up the meter at the top of the screen which requires a sustained period of tapping.

Tapping is just one small piece of the game and anything but your main source of income though with the game staying true to its setting by allowing you to invest in merchandise (stickers, posters,shirts, albums and much more) to give you a passive stream of income from dedicated fans. These can also earn you a handsome amount of income even when you aren’t in the game.

With these coins players can invest in upgrades to merchandise revenue, your music level (impacts the coins per tap) or cosmetic extras such as a new sound system or some band mates to enhance your tune and generate their own coins without you lifting a finger.

Herein lies the best hidden element of Beat Bop: Pop Star Clicker, as the music produced by your band evolves you really feel like you have gone on a musical journey from sole guitarist to rock band, each musical piece is engaging but also soothing and captures the ambience of idle clickers perfectly.

To keep things interesting as you play Beat Bop: Pop Star Clicker will occasionally throw tarot cards at you which come with a randomised event, some of which can give you an instant cash boost while others are less desirable. 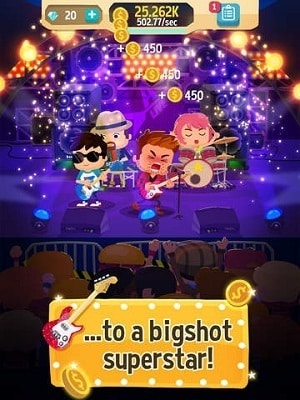 Players do have the option to double these bonuses by watching a video or skip them entirely through the same method, which can get a bit old at times but this monetisation method is quite standard for the genre and one that fans would be well used to. In addition to these random events players will find themselves motivated by collectibles, career goals and VIP lounge merchandise.

Beat Bop: Pop Star Clicker is a rock star in the idle clicker genre and shouldn’t be missed.

This review was first published on October 25, 2015. Read our update policy to learn more.

Games Finder is a Steam Curator and featured in the aggregate review scores data of MobyGames and Neoseeker.
FEATURED ON
Games Like Adventure Capitalist, Games Like Cookie Clicker, Games Like Kim Kardashian Hollywood
LEAVE A REPLY Cancel Reply