Spanning multiple game platforms is the high quality Bejeweled Blitz which continues to offer one of the best match three puzzle experiences in the genre driven mostly by its responsive, fast and flashy core gameplay. Developed by PopCap the Bejeweled name is one of the most recognised in the genre (next to Candy Crush) for its Facebook origins that introduced many to the genre on the back of friendly competitive leader boards with friends. 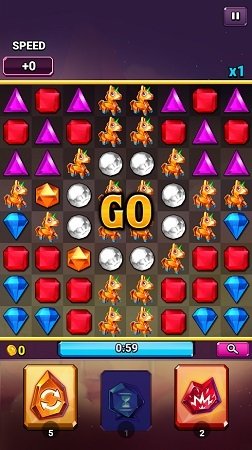 Like the similarly named games before it Bejeweled Blitz grew rapidly as a Facebook game and eventually was released on other platforms after its huge success allowing you to challenge high scores of your friends on your portable mobile devices and more. Bejeweled Blitz does little to challenge the core formula of the genre and is similar to other games that carry the Bejeweled name albeit it does focus more on multipliers and speed compared to other iterations of the series so its likely to be a favourite of fast paced players.

In Bejeweled Blitz players have only a minute to acquire the highest score possible with the leaderboard and high score system encouraging players to beat their best scores and that of their friends. The minute gameplay loop also supports playing in short bursts with players able to jump in and out of Bejeweled Blitz while waiting for a bus, appointment or any other short waiting time where you want a small gaming fix. The game grid  of Bejeweled Blitz uses a familar 8×8 game board where various coloured and shaped gems will appear to be matched in groups of 3 or more as is standard for the genre. 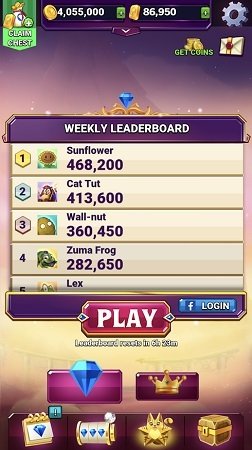 If you are able to connect 4 or more gems together of the same type you’ll get special bonus gems which can help you clear large sections of gems at once or provide a huge score boost. Obviously this makes achieving matches of this kind a key element to achieving the highest scores possible and quick players will want to train their eye to locate these powerful matches and take advantage of them and even chain them together at really advanced levels (some luck of the draw on the game board always helps here).

As noted Bejeweled Blitz is all about speed though with the ability for players to match gems as fast as they can without restriction (previous games would require matches to be removed from the game board before a new one can be initiated). This is still a common mechanic in many match three puzzle titles which helps Bejeweled Blitz feel more responsive as most as you aren’t handicapped to the on screen graphics and bursts of colours. Bejeweled Blitz also makes use of a Blazing Speed meter which unlocks when players match enough gems within a certain time period, resulting in even more increased scoring opportunities to further reward those that act quickly. 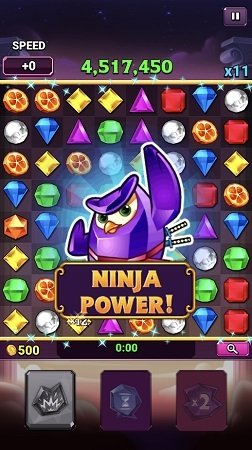 If you aren’t a puzzle gamer that likes things to be fast paced you can tackle the game in a classic mode (depending on the platform) which swaps the gameplay around to be focused on moves instead although the game shines in the fast paced experience as it’s score driven and lacks other significant achievements or objectives.

Games Finder is a Steam Curator and featured in the aggregate review scores data of MobyGames and Neoseeker.
FEATURED ON
Games Like Candy Crush Saga, Games Like Cookie Jam
LEAVE A REPLY Cancel Reply