Combining match three puzzle gaming with light monster role playing elements is Best Fiends. Using your own team of monsters (known as Fiends) you’ll battle against the slugs all while finding new characters for your team and evolving current ones. 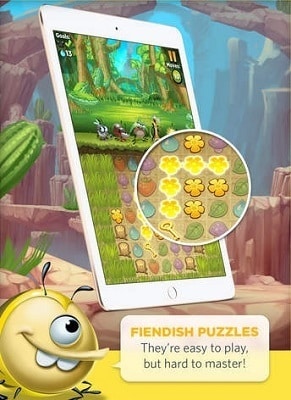 Set in the cute land of Minutia players will begin their tutorial with Temper, who will teach you the basics of Best Fiends. Gameplay consists of a game board filled with different coloured tiles (red, blue, purple, green and yellow). In order to pass each level players will have to collect a certain amount of each colour with a limited number of moves.

Best Fiends falls under the connector match 3 genre with players swiping their fingers across the screen to connect 3 or more of the same colour tiles vertically, horizontally and diagonally. In addition to meeting the goals for each level players will also encounter slugs that block their path forward.

In order to defeat these slugs you’ll need to match the colours that correspond to your team which will make them attack. It’s a similar system to games like Brave Frontier have made popular and is a great balance between easy to learn but still enjoyable time after time. 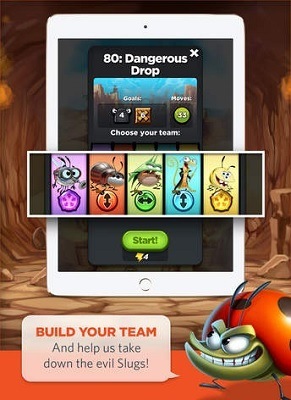 The depth in Best Fiends doesn’t really start to show itself until about a dozen levels in where players will be using multiple monsters in their team and balancing several goals at once. This is also when the game starts to throw monster upgrades and all sorts of rewards at you to ensure you stay hooked on perfecting your team.

While the game is a little slow to get into the thick of things once you get past the first dozen or so levels you’ll be hooked on creating and evolving your dream team as you fight through hundreds of cute levels.

This review was first published on May 29, 2014. Read our update policy to learn more.