Now you can make fake billions on your iOS or Android device with Bitcoin Billionaire and become rich. Designed as an endless tapping game where you’ll be able to make a fortune and turn your run down space into something over the top with expensive purchases as you splash your bitcoin profits. 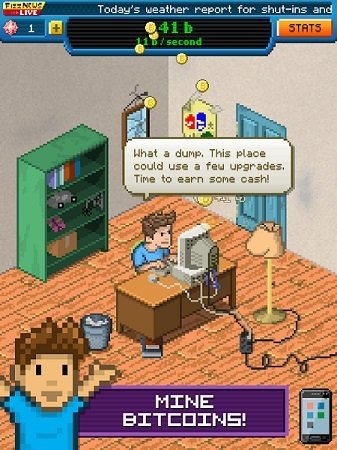 Starting out your billionaire adventure you’ll get to heavily customise your avatar with a range of hair styles and clothing as you journey towards making your first million and upgrade your run-down office into something more fitting of your newly mined wealth. This customisation is a nice little touch in a genre that often doesn’t give you a customisable avatar in any form.

Mining in Bitcoin Billionaire is of course the primary gameplay mechanics and acts as you would expect in a tap game with players having to tap the screen to generate bitcoins one at a time. Slowly by investing your extra bitcoins into computer upgrades and other more passive investments you’ll be able to mine hundreds with each tap and even have some passive bitcoin generation without tapping on your device. 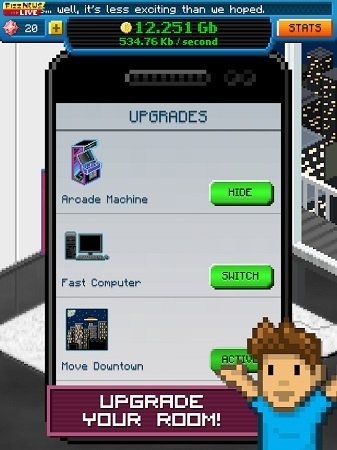 These investments include things like an energy drink factory, comic books, collectible toys and even robot butlers that passively earn you bitcoins while in game. Bitcoin Billionaire does let you upgrade these with the premium currency (hyperbits) to earn a small percentage of what they can generate for a few minutes after you’ve closed the app. This is a little disappointing when compared with more passive tap games that let you earn a decent amount of income even when you aren’t playing which Bitcoin Billionaire opts not to include.

Bitcoin Billionaire does somewhat offset this by making the active gameplay so addicting, especially in comparison to other games in the genre. The game achieves this by always throwing something at you from the drones that will drop off boxes with extra bitcoins or temporary boosts and even a daily allowance of premium currency (provided you play long enough). 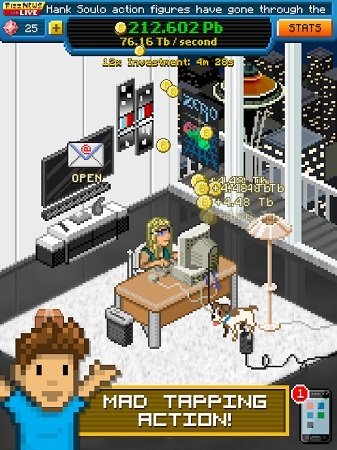 Your bitcoin adventure also does a good job of giving you constant goals through tasks, over 500 achievements that give you something to always focus on and the endless stream of visual upgrades to your office block. Whether this is enough to keep you engaged though will depend on your usual playstyle in this genre and where you sit on the active/passive scale of gameplay.

Bitcoin Billionaire clearly sits on the more active tap games out there with something always popping up on the screen to keep you mining those dollars. If you’re one that prefers to rely on some passive earnings in your down time though you’ll likely conclude this isn’t the mobile game for you.