Block N Load blends sandbox with the class based shooter to create a strategic 5 on 5 FPS where you’ll get to remake the environment to meet your needs while also playing as a host of colourful characters. With the ability to reshape the game maps every single time you play Block N Load offers more map variety which is limited only by the creativity of players. 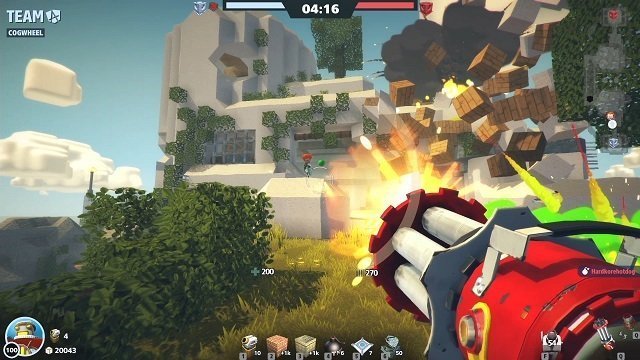 Gameplay in Block N Load is split into two distinct game phases; the build phase and then the attack phase. During the first of these players are given several minutes to plan out their defences which need to be centred around your 3 base cubes which need to be protected from the enemy 5 person team. During this build phase a well communicated team can make for some extremely strategic plays from burrowing under enemy defences to even launching your team right over the top of them.

This means building structures out of the various game blocks and combining them with utility blocks like glue, respawn pads, health stations, land mines, bear traps, plasma mines and turrets. With some of these blocks being class specific a balanced team is your best bet to ensure balanced defence and strategy. While the design of Block N Load allows for solo players some room to create an individual strategy Block N Load is at it’s best when you combine with your allies due to unique blocks that each class possess.

Blocks aren’t just defensively minded though and once the game switches to the shooting phase you’ll find them just useful. Aggressive blocks include bombs, C4, speed pads and bounce pads. All of these blocks have a different block cost with more advanced items costing significantly more blocks to keep things balanced. 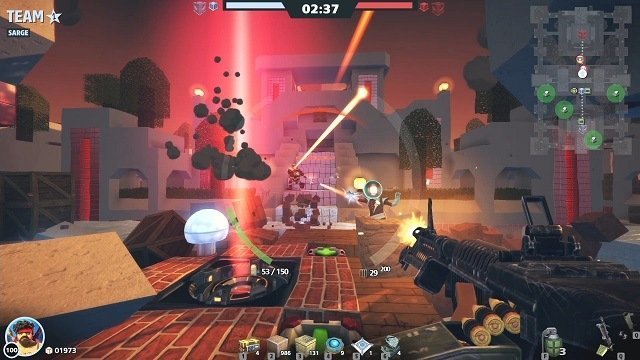 For example the durable brick will set you back 10 blocks per building piece while the temporary crate will cost only 2 blocks and are available to all players. Meanwhile the extremely durable sandbox will set you back 15 and is only available to Cogwheel and Sarge heroes. Similarly if you want to use strategic designed blocks characters such as Nigel will prove a preferred pick with the ability to lay down fake blocks, speed pads and bounce pads.

As you can see the builders behind the blocks are just as important in Block N Load as the blocks themselves with a hero list of over a dozen. Using a typical freemium setup of rotating free characters, permanent unlocks through in game currency and paid skins all players can engage the range of heroes on offer. The designs of characters are quite bizarre with the likes of Kreepy the Klown, Dream Genie and Yury the Yeti running and gunning around the battlefield. 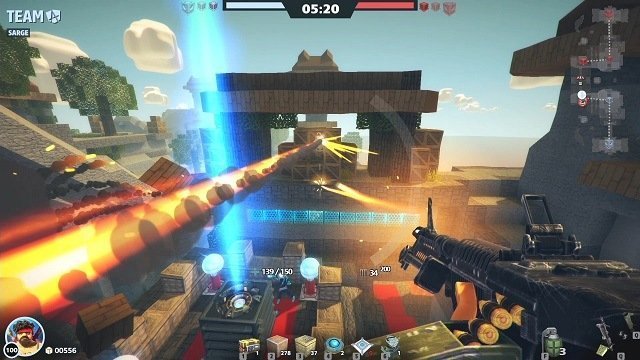 Said heroes each come with a primary and secondary weapon that supports their playstyle (assault, defence, area control, support) and a unique block (or several). Additionally a primary and passive skill can really separate you from other players with skills such as the ability to climb walls, heal allies, fear enemies, gaining shields for kills and many more based on the champions intended playstyle.

Block N Load ensures a wealth of fun and is particularly effective when played in a pre-made group of 5 which ensures more consistent planning. Those without ample numbers though will still find they can win or lose games on their own merits due to the small size of players in each match.

This review was first published on July 31, 2014. Read our update policy to learn more.

Games Finder is a Steam Curator and featured in the aggregate review scores data of MobyGames and Neoseeker.
FEATURED ON
Games Like Minecraft, Games Like Overwatch, Games Like Pixel Gun 3D, Games Like Team Fortress 2
LEAVE A REPLY Cancel Reply