Created from the Unity Engine Block Strike is a pixelated first person shooter for those with Android devices that want a fierce block themed shooter to play on the go. With an insane number of game modes, various weapon skins and a healthy player pool the game has overcome simple design to become a staple Android FPS with well over a million ratings on the Google Play store and millions of more downloads. 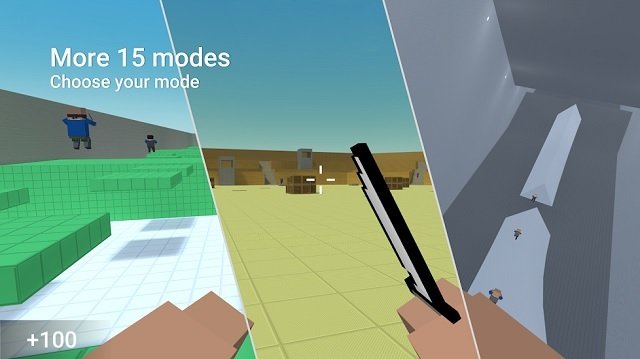 After completing the basic tutorial which covers controls and shooting players are let free on the Block Strike home screen where you can head to the shooting range, join a multiplayer game or repeat the tutorial to refresh your memory at any stage. Controls are exactly as one would expect form a mobile title with a joystick on the left side of the screen and players able to direct their vision with the right side of their device. Buttons for jump, shoot, reload and swap weapon are also located here to complete the typical shooter layout that most fans of the genre would be well familiar with.

For those that want to alter the controls slightly Block Strike includes this functionality with sensitivity options, button transparency, a lefty option and customisable buttons. This flexibility alone sets it apart from other mobile shooters which are often more bare bones on control customisation. The game also includes a number of general settings that let you alter your cross hair colour, have a hit maker indicate if your shots hit and a number of visual options (show damage, blood, bullet holes and others) some of which have performance benefits for turning things off and don’t severely impact on the core gameplay. 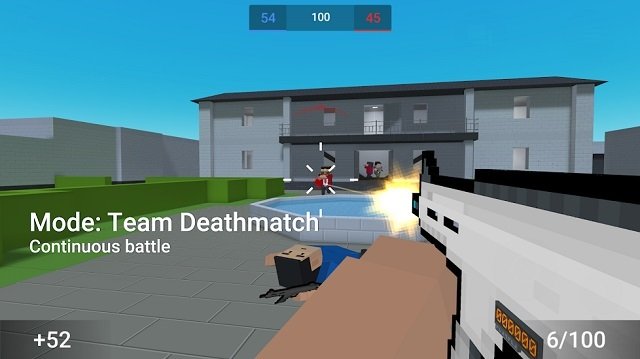 The wealth of options isn’t just limited to game settings though with plenty of weapons available that fall under the 3 game categories of main, secondary and melee. All up you’ve easily got over two dozen options here and each comes with their own damage, range and sound effects. You’ll find the familiar pistols, assault rifles, machine guns and sniper rifles amongst some visually distinct weapons for particular playstyles with over 40 in total.

Each of these will serve you well as you play through the various game modes that Block Strike offers be it Team Deathmatch, Knife Mode, Gun Game, Hunter, Zombie Survival and many others. Fundamentally these all revolve around defeating the enemy team but integrate varying objectives and rulesets to make each of the game modes fresh which is further built upon with 60 map designs. Your progress in all of these maps and game modes will also earn players experience and money to be spent on unlocking weapons and skins (some of which only drop from special crates). With many average shooters plaguing the mobile environment Block Strike stands apart with its solid mobile gameplay that is wonderfully supported with a wealth of content. It’s also one of the few games on the mobile market which offers the full FPS package by incorporating all the features of paid first person shooters.

Games Finder is a Steam Curator and featured in the aggregate review scores data of MobyGames and Neoseeker.
FEATURED ON
Games Like Pixel Gun 3D
LEAVE A REPLY Cancel Reply