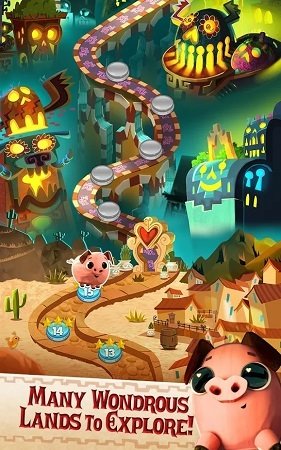 In these levels you’ll be helping Maria, Joaquin and Manolo to collect the yummy treats that fill the game board in order to achieve the objective for that level in a limited number of moves. The formula employed by Book of Life: Sugar Smash definitely is nothing new in this regard but the charm and general presentation of the game are some of the highest in the genre despite the lack of innovation. With a focus on the limited moves mechanic Book of Life: Sugar Smash will require careful planning of each match to ensure you can beat objectives consistently.

It’s also one of the most flashiest experiences in the genre on mobile with plenty of ways to get the game board to explode with colour for large scores which has quickly become standard for the genre. It does this while also being very responsive even on older devices of both iOS and Android variants which ensures nothing is slowing down your matching game speed. While in game action is responsive this comes at the cost of fairly long load times in between each level which unfortunately slows down your movements between the 100+ levels. 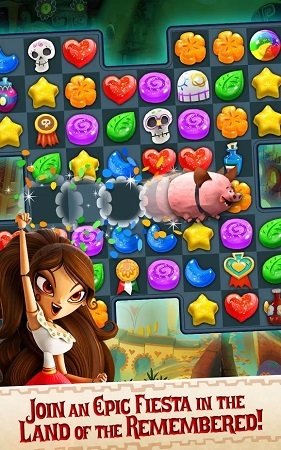 Book of Life: Sugar Smash doesn’t waste time ramping up the difficultly of the puzzle matching game either and quickly increases the requirements for each level less than half a dozen games in which can make it difficult for fresh players to get a strong footing. This difficultly is also enhanced by the strange game board shapes and obstacles that cannot be moved and limit your options to create matches making this title recommended for the intermediate fan of the genre.

In order to counteract this difficultly players are given a few special tricks which can be used to tip the balance back into their favour. Such as the maraca that lets you destroy a single tile and can come in handy when you find yourself just shy of your objective with limited moves left. Extra turns are also never fair away although will cost you a penny and not a long term solution for most players. 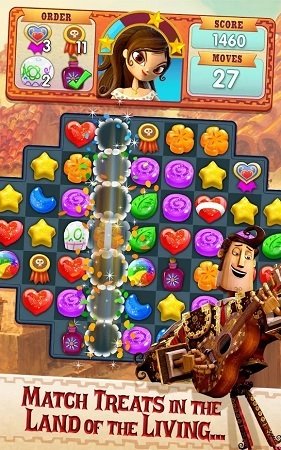 With the addition of movie tie-in elements to the Book of Life (including some voice acting from stars), responsive gameplay and higher tier of level difficulty that Book of Life: Sugar Smash has to offer makes it one of the stronger match three puzzle games currently available although might not be suited to first time players.

Games Finder is a Steam Curator and featured in the aggregate review scores data of MobyGames and Neoseeker.
FEATURED ON
Games Like Bejeweled, Games Like Candy Crush Saga, Games Like Cookie Jam
7 COMMENTS
LEAVE A REPLY Cancel Reply