Borderlands is one of the original fist person shooters that embeds a range of role playing features into the core gameplay loop. Giving birth to a franchise that continues to live on in the current day through various core games, expansions and even a narrative spin off. Establishing the franchise as a fast paced title filled with humour, a unique art style and more importantly randomised loot usually seen in action RPGs such as the Diablo series. 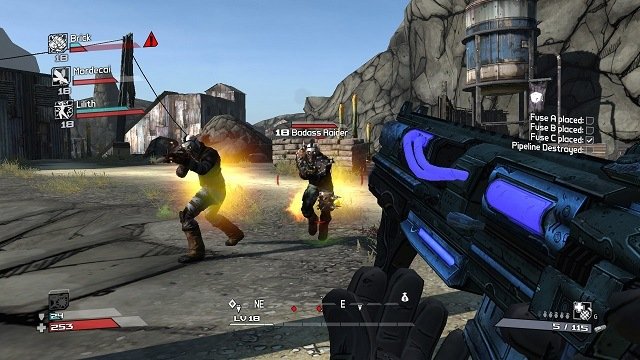 Sending players to the distant planet of Pandora where the lure of minerals has attracted mega space corporations to the surface and in turn a number of settlements for the working population have sprung up across the planet surface. Something much more valuable than resources lies hidden beneath Pandora though with an alien vault believes to be full of alien advanced weapons technology hides somewhere below. With failed attempts by two corporations to secure the planet players travel to Pandora as a Vault Hunter fighting off the convicts that were left behind in the initial vault search and now call the planet their home in addition to an array of alien creatures that are equally deadly.

This vault hunter can be one of four different characters with each have their own skill tree and fighting style with each also having some co-operative skills to provide friends in the co-operative environment. These vault hunters also come with their own personalities and backstory allowing them fit into the story elements of Borderlands seamlessly and provide voice acted characters for players to role play as. 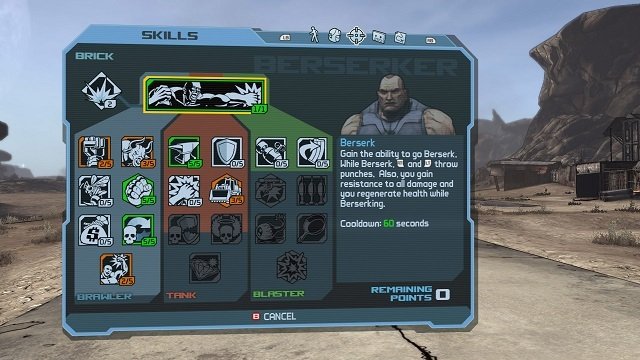 Character options include Mordecai who plays a hunter style role and prefers sniper rifles and pistols while using his pet Bloodwing to scout and attack. Roland your typical soldier archetype with specialities in rifles and shotguns while also having supporting shields and the ability to rapidly regenerate health from his front line efforts. Lilith who is a powerful magical Siren preferring SMGs and elemental based weapons she can use her unique phasewalk ability to turn invisible. Lastly is Brick a melee based character who also has a mind for explosive heavy weapons and is happy to charge head onto foes with his Berserk ability.

Naturally as a a role playing adventure as you advance in Borderlands your character will level up giving you a skill point to spend on their skill tree with each character having 3 deep skill trees that have different specialities and will need to be carefully picked for maximum effectiveness during the story adventure. Alongside your skills weapons will be an important element to your potency with all of these being procedurally generated with several tiers of strength and unique properties. While many of these are obtained from enemies directly or the various loot crates spread around the map you’ll also be able to barter with several traders if you find yourself being unlucky. In addition to weapons players will also find randomised grenade mods and shields to round out your equipment options. 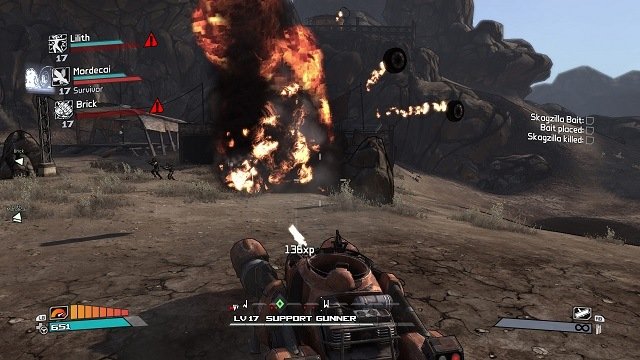 These guns will serve you across the main story line but also the large number of side quests which serve as a way to acquire extra experience, money and a few laughs due to their hilarious designs. Much of these take place in the open world with points of interest and fixed spawning locations scattered around it although does occasionally dive into a linear dungeon or building map. Navigating this planet is not overly difficult either with ample fast travel locations and even vehicle options to quickly drive over terrain to your next location.