Boulder Jack is a 3D endless runner game where you’ll have to run for your life from a deadly boulder. Unlike other games in the genre Boulder Jack uses a reverse camera angle hat has Jack running towards you (complete with terrified facial expressions). 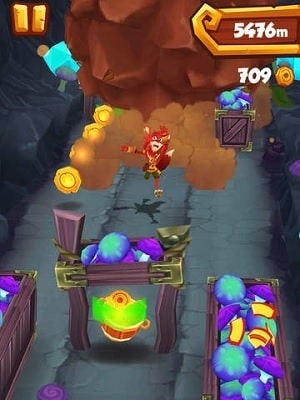 This gives the game a whole new learning curve for fans of endless running games as getting used to the controls will definitely take some time. While the change might prove frustrating at first it gives you a greater sense of urgency seeing the boulder slowly gain on Jack every time you collide with an obstacle.

Obstacles that players will have to avoid include bombs, crates and other wooden structures with a fair amount of leniency as to how much you can hit during each game. Just like in similar games each game in Boulder Jack can last anywhere from less than a minute to several minutes depending on your dodging skill level.

Along the way players are encouraged to collect the golden coins which will appear from time to time which can be spent on boosts or upgrades to allow you to run further and further in a never ending cycle. Boosts include the ability to wear armour to increase the number of hits you can take to gaining a headstart. 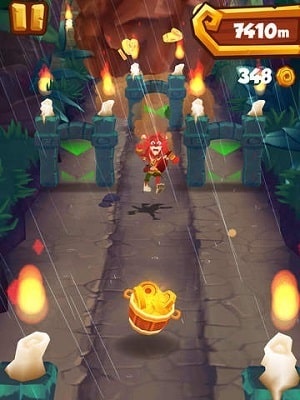 During each game a range of pickups will also appear including the crystal skull that provides temporary invulnerability and a coin magnet to make acquiring coins easier. All of these pickups and boosts have a few level of upgrades to increase their potency which does encourage you to hoard your coins to reap the rewards later on.

This formula definitely isn’t anything new and Boulder Jack makes little effort to innovate it which is disappointing seeing as the reverse running idea paired with some innovation could have made this game a star.

This review was first published on December 5, 2014. Read our update policy to learn more.