Brave Frontier is a unique turn based RPG that offers a mixture of Pokemon and classic Final Fantasy gameplay as you try to collect all the available characters and create your dream squad. This highly polished offering from gumi Inc. is available for free on both iOS and Android devices. 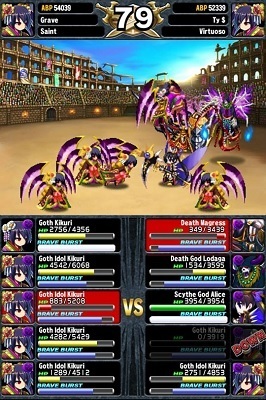 The game takes place in the world of Grand Gaia which is full of powerful creatures (well over 200). These collectible characters come in many forms (beasts and humans) and can belong to one of the six elements in the game (light, dark, fire, water, earth and thunder). Each of these elements has a strength and weakness against another element to create a classic rock-paper-scissors mechanic during combat.

Collecting units in Brave Frontier is extremely fun with such a huge diversity in the available characters ensuring each discovery is an exciting one. Every single unit in the game comes with their own rarity rating and skills so the strategy depth in Brave Frontier is near endless as you mix and match units to create your dream team.

Gameplay wise the game breaks down into three main components; quest, arena and events. The quest element of the game is the single player adventure that takes players across a large range of locations to defeat various foes and bosses. The arena is where all the PvP fighting takes place and lets you test your squad strength against other players as you try to climb the ranks. Finally the events are accessed through the Vortex Gate which are changed on a regular basis to provide new content. 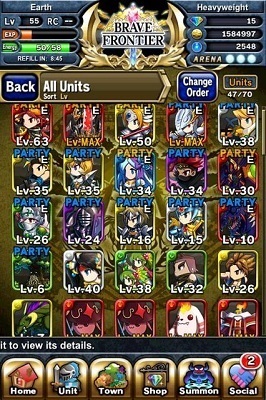 Battling is similar to most turn based games with players directing their squad to attack the enemies on the screen. In addition to normal attacks players can activate special skills by swiping up or down and use items which players must craft from loot drops.

If you’re a fan of turn based combat games (Final Fantasy) or like a good creature hunt (Pokemon) you’ll get potentially hundreds of gameplay hours from Brave Frontier as you create the perfect team to complete the storyline or battle it out in the PvP arena.

This review was first published on February 2, 2013. Read our update policy to learn more.

Games Finder is a Steam Curator and featured in the aggregate review scores data of MobyGames and Neoseeker.
FEATURED ON
Games Like Battle Camp, Games Like Final Fantasy, Games Like Puzzle and Dragons, Games Like Summoners War
2 COMMENTS
LEAVE A REPLY Cancel Reply