Aim and fire across over 200 exciting puzzle levels in Bubble Blaze where you’ll engage in three different types of modes as you make bubble pops of 3 or more colourful orbs. 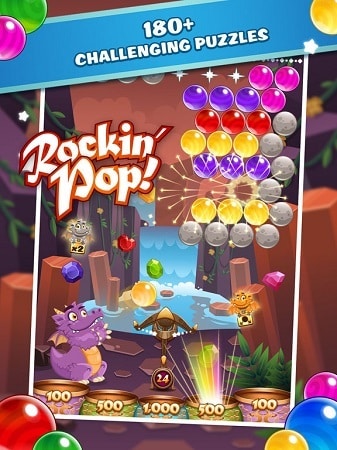 With Blackheart the evil knight stealing the dragon eggs it is up to you, Blaze the dragon to rescue them from his evil clutches. What this entails is blazing your way through hundreds of levels as you chase down Blackheart.

To move forward through said levels you’ll have to complete the objectives for the given level which ranged from Pop the Top which requires you to clear the top of the game board, Beat the Clock which has you racing against time and Hit the Egg which lets you reclaim one of the dragon eggs.

Doing away with the simple taps controls of similar titles Bubble Blaze has players pulling back a crossbow with a coloured orb attached before firing it into the sky. For the most part this works well, especially with the trajectory guide although it isn’t as simple as the tap controls of other games which means you won’t blitz through levels as fast.

Other mechanics that Bubble Blaze offers includes the ability to swap between two bubbles for your current shot and 4 boosts that can be purchased with gems that are earned with each level completion (while the premium currency coins offers stronger enhancements). 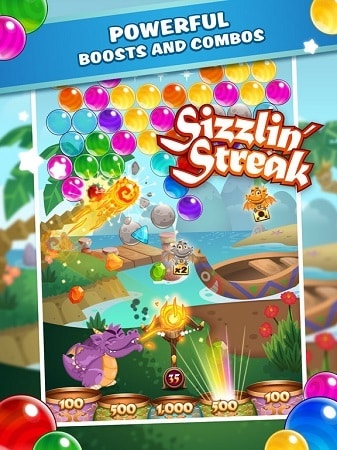 The ability to buy boosts with currency you’ll earn for gameplay is nice to see with boosts helping you pass a particular difficult level. Boosts include a rainbow bubble to match any colour, fireball to burn through bubbles, 5 extra bubbles or 15 extra seconds of game time.

Bubble Blaze might not be the best of the genre but it’s by no means the worse, offering a solid bubble popping experience with a good chunk of levels, challenge and variety.