Appropriately titled Bubble Witch 3 Saga you’ll find the third adventure in the Bubble Witch Saga franchise retains the gameplay fans have enjoyed from the first title but offers a whole new set of tricky levels with a few more enhancements to further refine the popular formula. Whether its your first or third time popping bubbles in the puzzle themed game you’ll find a high production value experience awaiting on your mobile device or computer. 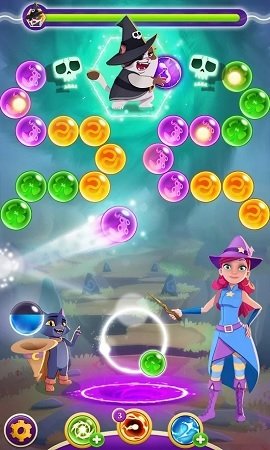 Despite countless games like Bubble Witch Saga out there now you’ll instantly see why Bubble Witch stands apart with its striking visuals and generally high quality app experience. Once again you’ll be playing as Stella the Witch as she powers her way through a large number of levels in order to defeat the evil Wilbur, the dark and magical cat. Joining her are Nero and Violet on your quest to restore the bubble matching realm back to its old self.

Like any game within the genre your first mission in Bubble Witch 3 Saga is a basic one as you are re-introduced into the bubble matching mechanics of the series which don’t depart from the standard offering. Those who have played the previous titles will instantly recognise the gameplay which sees you firing coloured balls with Stella’s wand in an attempt to link bubbles of the same colour together. As is standard for the series Bubble Witch 3 Saga includes aim guidance with your wand which makes it easy to land bounces off the walls and other fancy bubble matching moves. 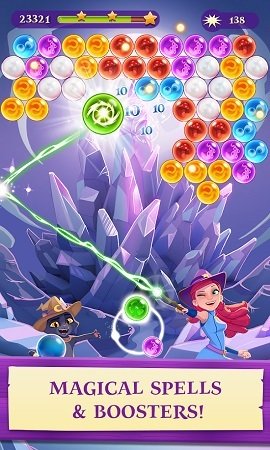 Each level offers up a different challenge that generally revolves around releasing something trapped within the bubbles or clearing all bubbles of the level which is achieved by matching coloured bubbles of 3 or more in any shape. At the completion of each level you’ll get the usual freemium rating of 1 to 3 stars based on your score which is calculated based on the numbers of bubbles left and total cleared bubbles which provides some incentive to revisit a level for the completionist but is generally easy to obtain.

To better promote revisiting old levels for stars Bubble Witch 3 Saga also introduces a basic house building mini game which gives you a great outlet for the stars that you will earn in each level as you upgrade your house and even visit those of your friends to share your successes. 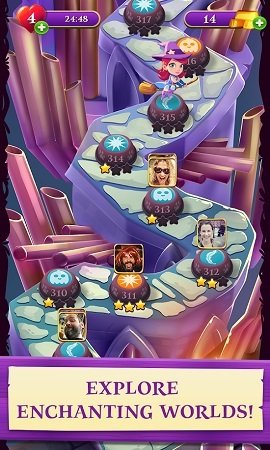 To help conquer the more difficult levels Bubble Witch 3 Saga throws a few options from the explosive energy balls that can clear an area quickly and the ability to swap between your next two coloured balls. Nero, a magical black cat will also be charged up with each coloured bubble match that lets you clear bubbles quickly through magical cat powers. The usual paid special boosters also make an appearance but are by no means required, which is standard for King developed games and generally more fairly balanced than most.

Games Finder is a Steam Curator and featured in the aggregate review scores data of MobyGames and Neoseeker.
FEATURED ON
Games Like Panda Pop
LEAVE A REPLY Cancel Reply