Bulletstorm is a unique and fast paced first person shooter released in 2011. The game focuses on rewarding players for crazy and creative kills on enemies. While it doesn’t include a competitive mode the game does have a fairly good co-operative experience. 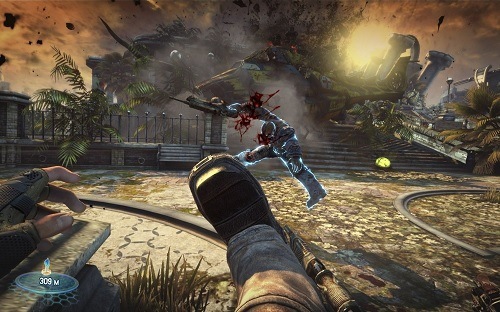 The game is set far into the future during the 26th century where the universe is under the control of a powerful and corrupt government. Players join this world as one of the peacekeepers in charge of silencing anyone that speaks out against the government. You’ve had enough though and decide its time to stand up for what is right.

In order to get your revenge though you’ll have to first find your way off the planet that you find yourself stuck on which is filled with deadly mutants and gangs.

To protect yourself you’ll have a great collection of fireams and melee moves. While there are plenty of realistic weapons in the game there is no shortage of fictional designs that help the player achieve some truly bizarre kills. An important part of this is your leash which allows you to leash items and enemies towards you for some fun combos. Players can also slide forward to move around with speed and kick enemies with a brutal melee attack. 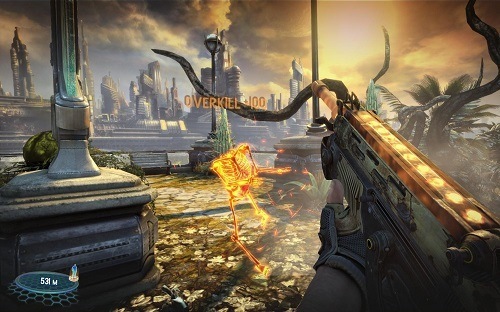 All of the weapons in the game feature an overpowered fire mode such as the assault rifles ability to fire a large number of bullets at once which is able to obliterate everything in your path. In order to unlock these alternate fire modes and unlock your weapons you’ll have to spend skill points which you earn for killing enemies, with more creative and destructive killings rewarding more points.

This unique focus of creative killing in Bulletstorm ensures you’ll have plenty of fun combining your leash and the various weapons together to maximise your skill points and inflict maximum carnage on your enemies.

Games Finder is a Steam Curator and featured in the aggregate review scores data of MobyGames and Neoseeker.
FEATURED ON
Games Like BioShock, Games Like Borderlands, Games Like Doom
LEAVE A REPLY Cancel Reply