Bunny Pop offers up over 200 bunny themed levels where you’ll shoot bubbles and make matches of 3 or more of the same colour. It’s a familiar formula but done with a cute aesthetic and bunny theme which is maintained from start to finish. Available for iOS and Android it’s a high quality offering released in 2017 which has seen continued updates to the respective Apps to fix bugs and slowly expand the games available number of levels. 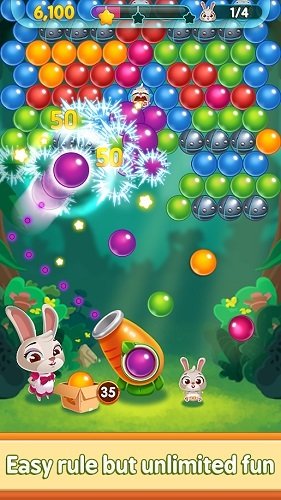 Each such level in Bunny Pop requires players to free every baby bunny trapped within bubbles by the wicked wolves on that level and range from one to dozens at any time and directly impact on the specific level difficultly. Mechanically freeing bunnies is an easy enough task that requires you to pop the bubbles surrounding them by firing coloured orbs. If your fired orb makes a match of 3 or more you’ll clear them from the game board, freeing any bunnies (and bubbles) underneath them which does encourage careful placement and targeting higher up bubbles for maximum effect.

For the most part gamers familiar with this genre will rarely find themselves challenged during the early parts of Bunny Pop although the later stages do begin to offer real challenge due to the limited number of bubbles or the large number of bunnies that need a rescue. To support this game design further Bunny Pop does away with time limits all together which allows for careful placement of your bubbles pushes the game towards a casual and relaxing atmosphere. 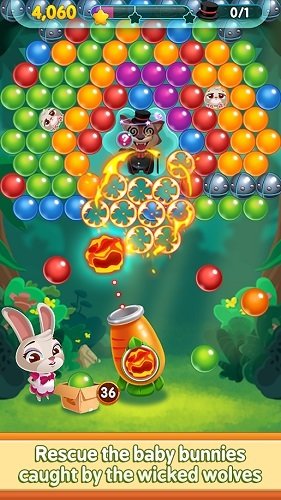 Furthermore, a 3 power up system allows you to blast through obstacles to achieve your objectives for players that are well and truly stuck. This includes power up abilities or clearing a large chunk of bubbles, specific rows or allow you to gain increased accuracy on your shots. While limited these power ups can also be earned within a level by scoring a 5 combo which grants a randomised power up to the player.

Bunny Pop also features the swap mechanic that is typically seen in the genre which lets you swap out a bubble colour you don’t like with the next in the queue, which encourages players to more closely monitor their upcoming bubbles to create potential combos. On top of the baby bunny trapped levels you’ll also encounter some other game modes, including a carrot rescue mode that replaces bunnies with tasty carrots and alters the mechanics slightly by allowing them to be collected by any bubble colour. 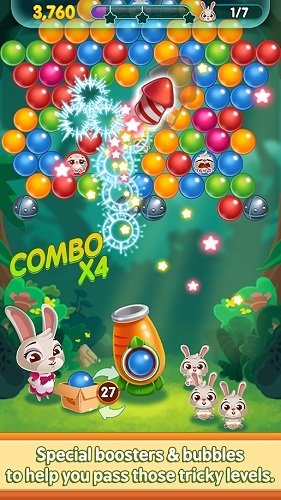 Mechanically fans of the genre would have seen all of these features before but Bunny Pop does it all with cute bunny style graphics that encourages you to pop and hop between every single level. Overall Bunny Pop is a nice bubble shooter with some good production values, although it is a little ad heavy compared to similar mobile titles.

This review was first published on January 18, 2014. Read our update policy to learn more.

Games Finder is a Steam Curator and featured in the aggregate review scores data of MobyGames and Neoseeker.
FEATURED ON
Games Like Bubble Witch Saga, Games Like Panda Pop
1 COMMENTS
LEAVE A REPLY Cancel Reply