Call of Juarez: Bound in Blood is a first person adventure that takes you through a Wild West game world. The game is the second in the series and provides more of an open world journey compared to the original. 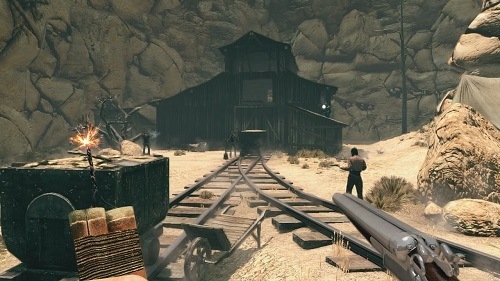 The game follows Ray and Thomas McCall, the outlaw brothers who quest across the West for the Gold of Juarez. Along the way there will be plenty of opportunity for blood as you take out anybody that stands in your way.

Call of Juarez: Bound in Blood takes the foundations set from the original game and expands on it to deliver one of the best games in the western genre. You’ll have the opportunity to participate in everything that defines the Wild West from horse riding to wagons to bank robberies, prison breaks and bounty hunting.

The game mixes missions and open world environments with a good amount of content on both sides of the coin. You’ll also be encouraged to replay areas as missions play out differently based on the brother you choose. Selecting this brother will either occur at the start of a mission or at a certain point where each brother has their own task to perform in order for the mission to suceed. At the end of these missions you’ll have to challenge a gang leader to a showdown, which get progressively harder.

Outside of the missions you’ll find plenty of side activities to take up in the free roam portion of the game. The most common of which is becoming a bounty hunter or hired gun but other fun side missions do also pop up from time to time. 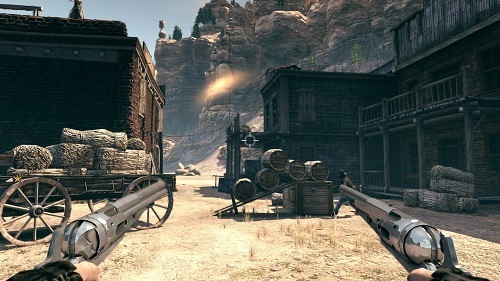 To stay safe around this harsh Western game world you’ll have plenty of weapon variety that stays very true to the era with plenty of pistols, rifles and even a bow and arrow at your disposal. In order to make sure you’re always decked out with the strongest available weapons you’ll find plenty of traders and hidden chests scattered around the world full of money and ammo to top up your supplies.

Bound in Blood takes the series in a great direction by adding more open world elements giving it more of a Red Dead Redemption feel rather than a linear shooter like the original.

Games Finder is a Steam Curator and featured in the aggregate review scores data of MobyGames and Neoseeker.
FEATURED ON
Games Like Red Dead Redemption
LEAVE A REPLY Cancel Reply

Call of Juarez: Bound in Blood