Cards and Castles links together the trading card game genre with tactical strategy to create a free to play title that has strategy challenge hiding in every match. Grab your digital cards, build a deck and place them carefully on the grid based map as you challenge other armies with your own selected faction.

Set within a fantasy landscape Cards and Castles has a cartoon theme to its art style which while simple ensures players can easily recognise different cards and the broader situation for their next move. Each match pits you against your enemy on a grid landscape which features your castle that must be protected from the enemy advance with your goal to conquer the enemy tower and reduce its hit points down to 0. Standing between these towers is the battlefield where cards are summoned by both players to engage in strategic battle.

In order to achieve your victory you’ll arm yourself with a 40 card deck which contains a mixture of units, spells and buildings that aligns with your intended strategy. This strategy is only as good as contact with your enemy though where players will have to react to what the enemy throws their way to achieve victory. 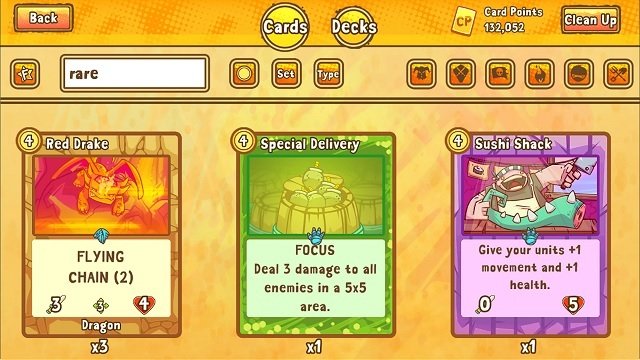 Within your personalised deck units are your main damage dealers while spells and buildings are support orientated. Spells offer this support directly to one of the game grid squares while buildings can occupy a space for a time and can provide a viable foothold to extend your attack into the enemy side of the map.

Similar to other strategy card games at the start of each turn in Cards and Castles you’ll draw one of these cards and be able to play cards from your hand accordingly provided you have the power to do so. In each of your turns each unit on the field can move and attack given an opponent is in range which generally means an adjacent square unless it is one of the few ranged unit cards available. Another unique feature of the game is the back button which allows you to redo your turn (with limited use each game match) if you make a mistake which keeps the experience more casual than comparable trading card games and provides a forgiving mechanic. 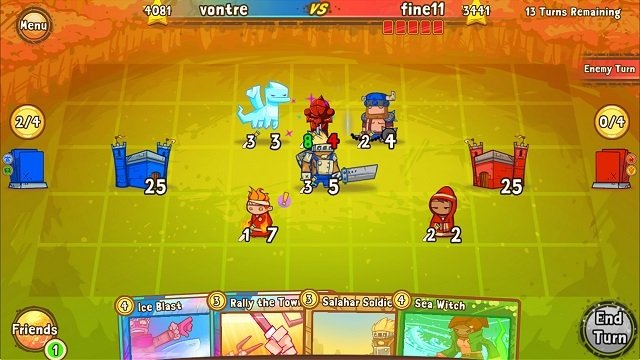 Your pool of cards to create your deck each come from a different faction that has their own theme and in turn strengths and weaknesses. Within each deck players combine up to two of the six available factions of vikings, crusaders, pirates, warlocks, ninjas and druids. Vikings for example are deadly in combat and have unique abilities such as freeze and chain lightning that give they fantastic combat utility. On the other hand the crusader faction prefers to heal their units and absorb damage that results in durable units on the battlefield.

Matches in Cards and Castles can take around 15 minutes with the victor generally being the player that can maintain control of the game board and keep their opponent on the back foot. While careful deck design around aggression is definitely rewarded in both the multiplayer and single player campaign elements a lucky or unlucky draw still plays a role in the final outcome.

Games Finder is a Steam Curator and featured in the aggregate review scores data of MobyGames and Neoseeker.
FEATURED ON
Games Like Clash Royale, Games Like Deck Heroes, Games Like Hearthstone, Games Like Plants vs Zombies, Games Like Yugioh
LEAVE A REPLY Cancel Reply