Cascade is all about spinning and matching colours on your mobile device with a game that takes the basic elements of the saturated match three puzzle genre but imports some additional spinning mechanics into the mix. The result is hundreds of levels of what feels like a fresh experience in the mobile puzzle genre. 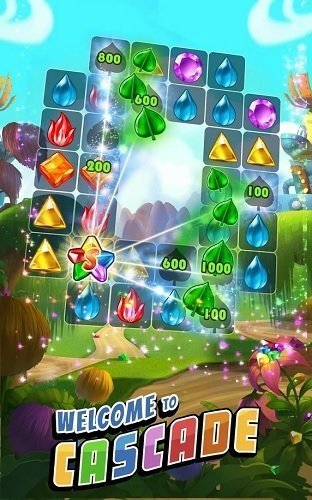 Starting in the Cascade Hills players are introduced the core features of Cascade through a typical tutorial introduction. Unlike other match three puzzle games though you best pay attention to fully comprehend the introduced spinning mechanic and maximise it’s potential in each level. While you’ll see a familiar game board as you load up the first level the requirements for matches and how you go about performing them is completely different to what you have seen before which stops Cascade from being just another gem matching game.

At the start of each Cascade level players will perform a spin to fill up the bottom separated row of 6 gems. This row is not directly part of the game board but instead acts as swappable gems that you can place in their corresponding columns as you please. This is done by simply tapping on the gem you wish to swap and not only is this a convenient way to trigger large combos swapped gems also do not need to adhere to straight line matches allowing you to create some truly marvellous scoring opportunities. 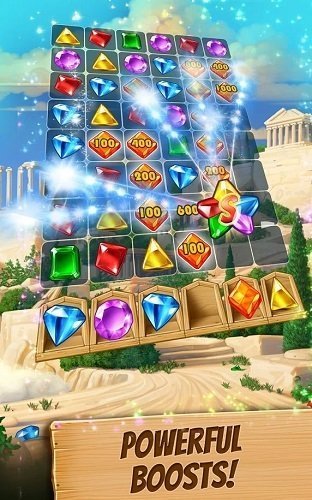 If you can use all 6 spun gems you’ll be able to spin this special row again filling it up with new gems to make match combos along with a bonus score multiplier to help you meet the score requirement for that level.

Additional mechanics includes the likes of burst gems, wilds, hammers, shifters and other game boosts to help you clear through the available game levels by boosting your score. In standard fashion this score is the basis for level completion and also for comparison against friends. Star ratings are also awarded at the completion of each level which pairs with a handful of in game currency. 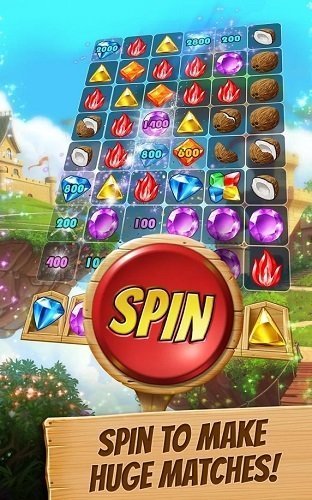 This formula of Cascade changes little throughout the 900 odd levels but they do become increasingly difficult as the shape of the game board changes requiring you to carefully consider the order you use your special row of gems to ensure you can secure free spins.

Unlike other match three games where luck plays more of a role Cascade has a nice touch of strategy to it as you an see all your available gems in the current spin and assess the game board accordingly before making a single move.

Ultimately Cascade is a fun little experiment to keep you occupied in your down time and has a little flair compared to similar titles. Some performance issues and lack of colourful explosions is the trade off compared to other flashier match three puzzles though.

This review was first published on January 21, 2014. Read our update policy to learn more.