Castle Creeps TD combines the likes of card collecting and traditional tower defence in a fantasy realm. In order to advance through the horde of game levels you’ll guide your hero units, upgrade towers and fight a range of opponents. 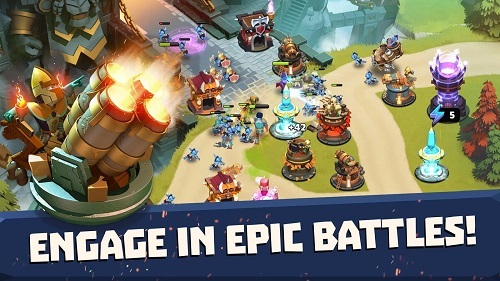 In Castle Creeps TD your core towers are the cannon for area damage, the bow for a fast attack speed, infantry to hold the enemy in place and the magic tower to penetrate tough armour. Your enemies are a range of fantasy creatures with the likes of ogres, goblins and all manner of other strange fantasy characters.

Players can counter these enemies with their own heroes of which there are 8 to collect and level up with their own card system that is similar to that used for towers. Acquiring said cards is done so by completing game levels, opening your regular free chests or making a purchase. Once players have the required number of cards you can pay a small gold fee to upgrade the stats for that card permanently with the likes of more health, damage and range.

Core tower defence gameplay within each level is as one would expect with a number of construction points where you can place one of your four available towers. Destroying enemies that attempt to reach your base will generate magic currency (elixir) to build more structures or upgrade your existing one. 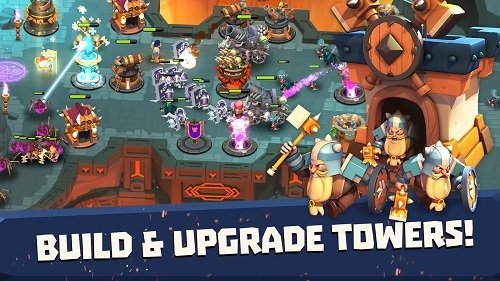 Castle Creeps TD does also include a reasonable amount of strategy within each level thanks to detailed stat cards for each enemy that explain their resistances, best counters and other important information. With multiple upgrade paths for towers, hero powers and temporary reinforcements to also manage there is little time to rest in Castle Creeps TD. A unique sentinel weapon that also recharges power slowly can also deal significant damage when needed.

Overall Castle Creeps TD is a fun little title with good presentation however it does suffer from freemium trappings with its game design. For those that only want to play every now and then though these systems are of fair design.