Castle Crush: Epic Strategy entices you to challenge players across the world in a real time card game. Summon all sorts of troops and spells in order to lead your carefully selected army to victory. 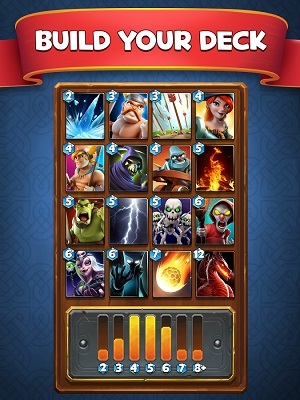 Castle Crush: Epic Strategy gameplay centres around 3 lanes in the centre of the map. At either side stands a player castle which begins the game with 2,000 hit points. Should your castle be destroyed before your opponents players will lose the match.

In order to deal damage to your opponent (or prevent it) players have 5 available cards at any time, shown along the bottom of the screen. Each of these cards has their own summoning cost in gems. This gem like currency regenerates slowly overtime and while the maximum count starts as low as 2 the game slowly increases this maximum to allow stronger units to be played onto the battlefield.

New cards are added to your hand every few seconds on a timer but are not automatically drawn if you run out of cards which further balances the game around careful timing. Players may only place the cards as far up the lane as their furthest hero (to a maximum of half way), making momentum a key victory decider as you can limit the amount of time your ally has to react by playing their own cards. 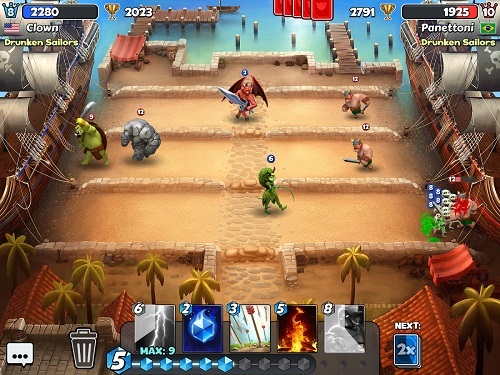 Cards come in all shapes and sizes from massive towering ogres to vikings, pirates and mages which have their own speeds, ranges and damage power. Counters are generally quite obvious such as a powerful long range mage being more than adept at dispatching a slow moving tank. Spell cards are also available such as bombs that can quickly deal a burst of damage at target location.

The cards you select for your deck are determined outside of the core game and can be upgraded as you play more and more games against opponents in traditional strategy design.