Combining city building and tapping action is Century City, it’s a genre that many love to hate but Century City might just turn your attitude around. Available on iOS devices you’re guaranteed to get hours of tapping out of the experience. 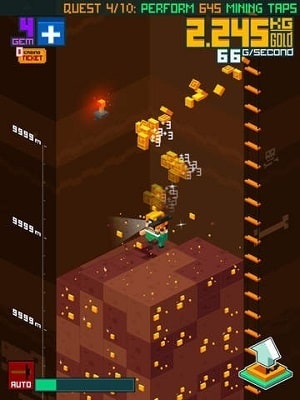 Century City’s formula is nothing new with players starting out with a blank city slate and a gold mine waiting to be extracted for it’s valuable gold. This is where the tap based elements of the game are played, deep down in your own private gold mine.

This tap element is fairly well optimised and able to register multiple fast finger taps with no issue. Each tap you make will also fill an auto tap meter at the bottom of the screen which when filled will give you a fairly long period of auto-mining which is a nice reward and can give a significant boost to your gold reserves.

Spending this mined gold takes place above ground on various city buildings such as a town hall, office building, restaurant, car park and school just being some of the available options. These are automatically placed on pre-determined locations so you won’t be customising your city layout in Century City unfortunately. These buildings are the passive gold generators of the game which will reduce the strain on your fingers. 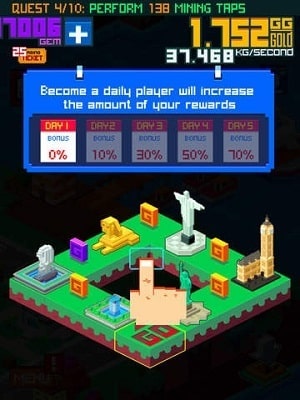 Buildings can be upgraded after initial purchase to further improve these passive earnings along with your pickaxe and other mining equipment to improve the more active component of the game.

Of course there are plenty of other small details to the game that will keep you hooked from mini-games, rewards for regular playing and randomised rewards. In app purchases are also there in the shadows but definitely not as dominating as other games that are out there.

This review was first published on May 24, 2015. Read our update policy to learn more.