Choice of Robots is a uniquely text orientated experience that is filled with over 300,000 words of story and world building making it one of the largest text based adventure games currently available. It’s a science fiction themed adventure that blends novel with the interactive and delivers plenty of surprises along the way for players to uncover. 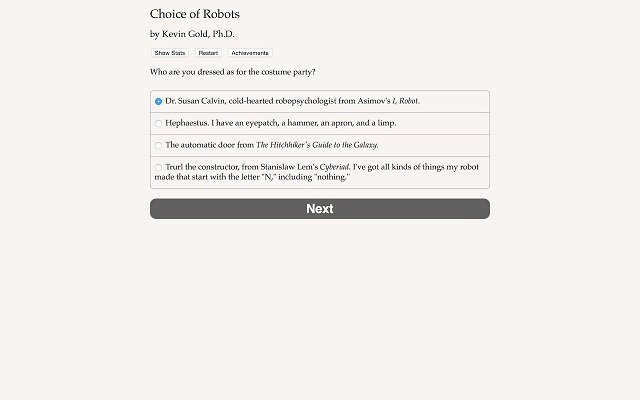 Written by Kevin Gold the game is entirely text based with players given complete control over every single element of the game world. As the name suggests this world is inhabited heavily by robots with emphasis on players either instigating a robot uprising or preventing it completely by showing robots the meaning of love instead. This choice is ultimately the players who can weave and dodge through the various game choices to arrive at either conclusion and does allow you to play the game multiple times with a completely different focused if so desired.

Of course due to the sheer depth of this interactive novel these are really just two small paths that are available in the wealth of little choices that you make along the way based on your own moral beliefs or simply to see what happens in this science fiction world as a result. Choices such as building an artificial intelligence to enslave the government of the world, marry (human and robot options) or start the robot war in your own name are just a few of the tougher and key pivotal moments offered by Choice of Robots to give you an idea of the dramatic decisions that are sent your way. 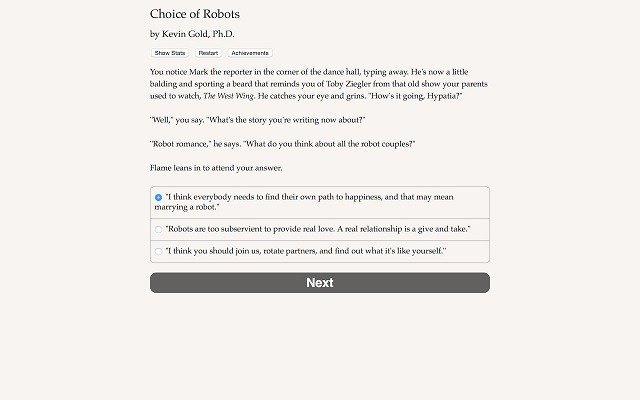 Whatever your ultimate goal players will have thirty years as one of the worlds brilliant robot makers to pursue their end objective which is part of the reason why so many of these decisions fall into your hands. With you as their creator and plenty of time how you shape your robots are completely under your control. In addition players can choose their gender, unlock over 70 achievements, romance 9 different characters and experience four very different climatic chapters in the process.

While the lack of any presentation can be a little off putting to be begin with players will quickly find themselves deep in robot story and engulfed in their decisions to the point that graphics are not missed although some of this will come down to your ability to project what you are reading into your own visual images. Without the distraction of graphics Choice of Robots can break itself down and focus on the deliverance of a deep story with twice as many paths as similar story games that need to balance development investment across text and visuals. 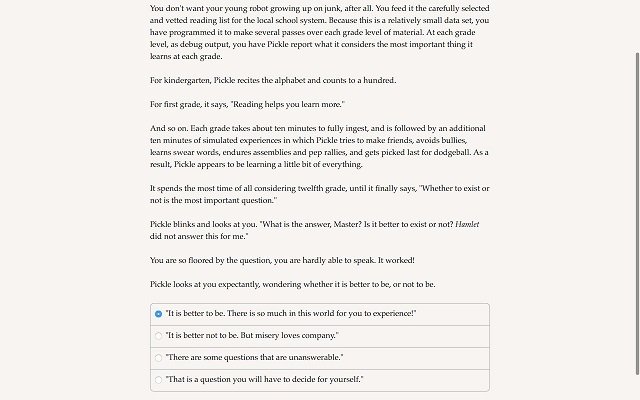 Choice of Robots delivers everything that it promises and is a great starting point in the Choice of Games franchise with additional stories available for those wanting a new story beyond this sci-fi entry.

This review was first published on January 25, 2014. Read our update policy to learn more.