Circle Empires Rivals has you battling your way across randomly generated circle maps as you chase down ultimate conquest in the 6 available game modes. Beneath it’s deceptively simple graphic design you’ll find a treasure trove of strategy, laughs and challenge waiting to be unlocked while encompassing the easy to learn lifetime to master mantra of a good strategy title and tracking your stats every step of the way. 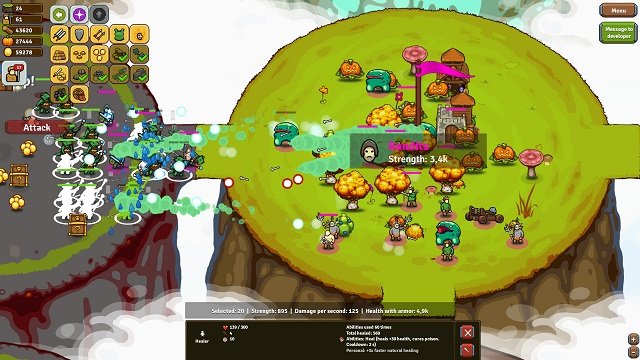 Available as either a single player, co-operative or competitive strategy title Circle Empires Rivals starts with the selection of your leader who bestows special benefits. At launch you’ve got more than two dozen options that slowly build up overtime as you win matches with previously unlocked leaders. Starting with the likes of Wolfam the Warlord who has a starting bonus to food and erects towers every time a circle is captured you’ll find each clearly has an intended strategy in mind be it economical, aggressive or a balanced strategy.

Another modifier in strategy selection is the aforementioned 6 game modes that can call for vastly different approaches due to the mechanics they introduce. This includes full conquest and imperial conflict that focus on taking over other players (and the world) to monster hunt, king hunt and stop the army that have you hunting and running for a specific objective on the map. Lastly is the more unique roguelike mode where you’ll have to take severely limited resources and clear the map where every resource is precious. 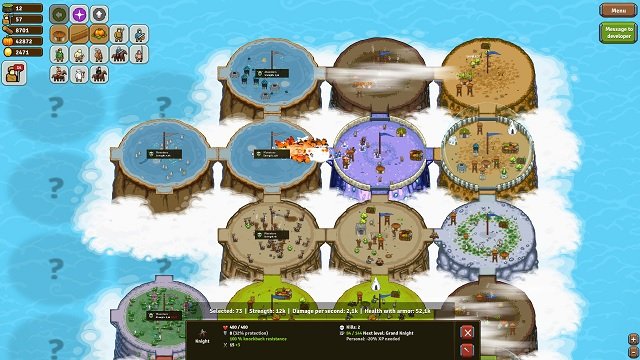 Regardless of the mode selected core gameplay in Circle Empires Rivals remains the same with a simple three resource system of food, wood and gold for players to gather from the environment with workers and being placed in your storehouse. While each circle of the game map starts with a small handful of these they’ll slowly regenerate over time (except in rougelike mode) naturally or through player intervention. While the resource management and generation side of Circle Empires Rivals is quite minimal your options for spending them are the opposite with an almost overwhelming number of options to experiment with that will take many games to fully comprehend.

The majority of your fighting force will come from the nearly a dozen basic units that feature familiar faces of archers, guards, spearman, knights and healers with their own health, damage and abilities. Meanwhile in the advanced menu you’ll find vastly more expensive units and towers that are perfect counters to other strategies or as a key driver in your own. The final pillar that you’ll have at your disposal is a handful of research paths to boost attack, defence, resource gathering and a small number of highly specific technologies that are linked to specific circle biomes you’ll encounter. 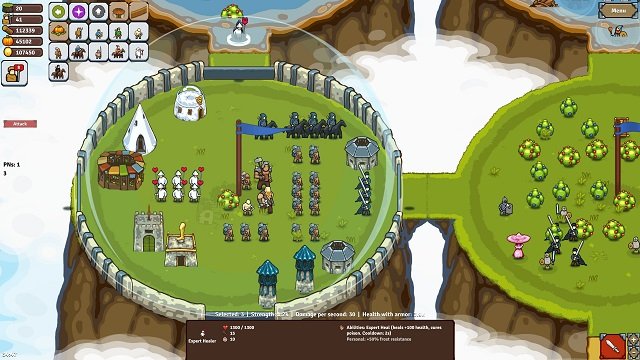 Herein lies one of the most unique aspects of Circle Empires Rivals and where it steps away from traditional RTS mechanics with circle biomes that act as small individual islands of resources and enemies just waiting to be captured. To add an extra layer of strategy they will also occasionally spawn with a variable be it healing or poisoning units in the circle to giving arrow resistance or bonus experience that may make it a primary target for your growing army. This experience system also serves as a secondary upgrade path with units becoming stronger with time but can feed into a snowball of power that can be difficult to squash if you fall behind. This is by no means unique to Circle Empires Rivals though with strategy games by their nature often a game of momentum.

With a wealth of options to customise your experience by altering difficulty, map size, biomes and the competitively important mirror maps Circle Empires Rivals manages to offer something for the both the casual and competitively minded strategy player particularly once you factor in the deep stat tracking leaderboards which have already amassed thousands of players early into release. It also means the value for your dollar is high as you mix and match different variables to alter your experience from one day to the next.

This review was first published on April 26, 2020. Read our update policy to learn more.