Contact is a role playing title for the Nintendo DS handheld console. With an interesting story, good level mechanics and an enjoyable soundtrack it has the foundations of a quality adventure. 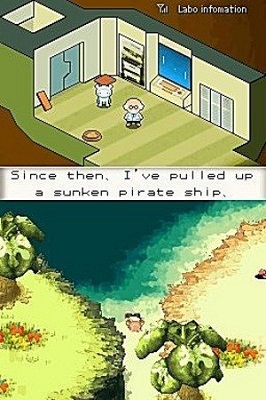 The story of Contact starts with the Professor fleeing through space as he tries to lose a strange enemy known as the CosmoNOTs. Crash landing on a strange planet and losing the power cells to power his ship he becomes stranded and in turn calling upon the help of Terry, a young boy.

Terry helps the Professor by exploring the planet and locating the cells required to re-power the spacecraft and venture back into space. With evil close on your tail though and a number of dangerous areas to explore for the cells safety is not guaranteed and the Professors true intentions quickly also throw a spanner in the works.

The game directly makes note of the player that is controlling Terry and in doing so breaks the fourth wall. The Professor also regularly refers to players directly instead of communicating with Terry.

This alienation between the player and Terry is also built up through a number of gameplay mechanics. Most notably is that combat is fairly automated with players only having limited say in weapon and skill choice and are otherwise restricted to mere spectator. Weapon choice is key to strategy in Contact though with three weapon types (gloves, clubs and swords) which vary in effectiveness depending on the enemy.

While Terry does improve his statistics overtime this is not done through traditional levelling and instead is based on specific actions. Attacking enemies for example will boost strength while taking damage improves defence stats.

There are also a number of external character statistics in Contact which alter your relationship with the NPCs of the game world. These are fame, karma and courage and at very high (or low levels) can result in weak enemies fleeing from you or attacking you on sight. 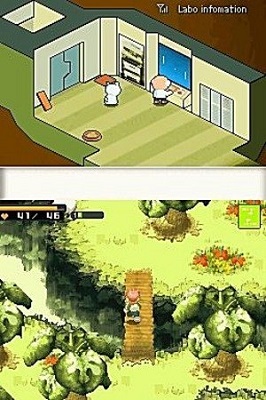 Further depth is primarily added through a costume system which allows new skills to be learned as the eight costumes are used more and more. These include things like chef, thief and fisherman which all tie closely to the role playing elements on offer and the item system which has an emphasis on food items to restore health. In order to unlock all of these costumes players are required to be diligent with side quests which are entirely optional but will mean missed costumes.

Contact is a nicely designed fourth wall breaking RPG, while the combat can prove a little dull due to your limited interaction the rest of the world and story aspects are top notch.