Corpse Party was first released in 1996 and has seen a number of re-releases and sequels since the originals success. Like all classics though the original is the most acclaimed and also the best place to start. In 2021 a remastered version (Corpse Party (2021)) was released for modern platforms though which allows you to enjoy the original with significantly enhanced art, voice acting, audio and includes some additional chapters. 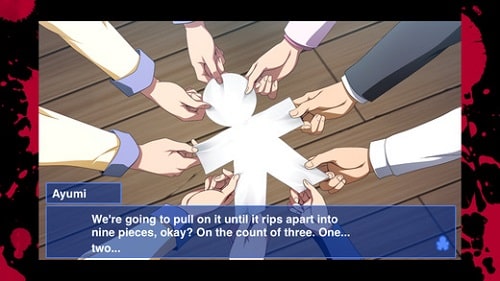 Drawing from a unique alternate history where an elementary school (Heavenly Host Elementary School) had to be torn down due to disappearances of staff and students the game uses a modern day Tokyo school as the primary setting for your adventure.

Built on the same site as the original school players will join the other characters after a school culture festival. Between swapping ghost stories a charm is performed to ensure that the students will be friends for all eternity. This charm though triggers a portal to an alternate dimension, one where the Heavenly Host school still exists and is filled with the ghouls of the missing school children and staff. Unlocking the truth of the forces behind the school is your only chance to return to your own dimension.

The main school child at the centre of this is Satoshi Mochida, one of the more timid students who also has a kind heart (for which she is often teased). She joins a number of other students along with her younger sister each of which have their own distinct personality. 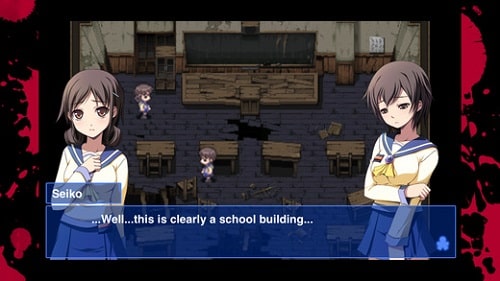 In terms of gameplay that Corpse Party offers it is a linear experience for the most part with players controlling their character in a top-down perspective. Focused around exploration, environment interaction and object hunting the game prefers enemy avoidance. Split into five separate chapters the game reaches its end in a number of endings, one of which is intended as the “true” ending.

Corpse Party and its sequels which are worth investigating if you enjoy the original are a wealth of well written RPG goodness.