Crowntakers mixes several genres together to create an interesting blend of turn based combat, role playing and rogue-lite elements that will keep you hooked in that familiar cycle of playing just one more game. When it all comes together Crowntakers is a highly strategic and tactical challenge that will require experimentation and experience to achieve victory on your selected game platform.

The fantasy like setting for your adventure is one you would have encountered before with a peaceful land being thrown into chaos after the loss of their king and struggle on the knife’s edge of survival. You are tasked with stepping up and embarking on a journey to free him from evils hand and in turn restore the order and prosperity that the game world has grown accustomed. 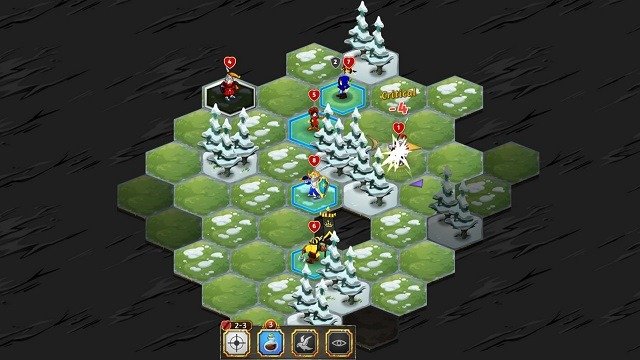 Players in Crowntakers will start on the easy mode in the game (you’ll thank the game later) which allows you to carry over experience from game to game while also being able to skip the bosses at the end of each level and is tuned in this matter to allow you to have a constant sense of progress and engage with all the game mechanics before attempting to do it in a fully rouge-lite manner if you are so inclined. Each adventure starts at your house with players taking control of their swordsmen hero which creates your basic foundation from which all adventures will grow. To navigate the game world of Crowntakers you’ll find it is split hexagonal shapes which can create multiple paths to the end of the level at which point you’ll fight a boss and move onto the next stage. Each of these maps are randomly generated each game to give Crowntakers that level of randomness that ensures countless playthroughs and corresponding challenges.

Each of these hexagonal locations on the map will be populated with an event be it a town (with merchant and blacksmith), enemy, cave, cottages or a host of other special events that require player interaction and decision making. For many of these events though players have the option to avoid them completely or make choices that may impact on the outcome which creates that familiar risk and reward of similarly themed games. Taking additional risk early can often pay off in Crowntakers with it either ending a potentially doomed run anyway early or by boosting your power significantly so you have a strong chance of finishing that run. 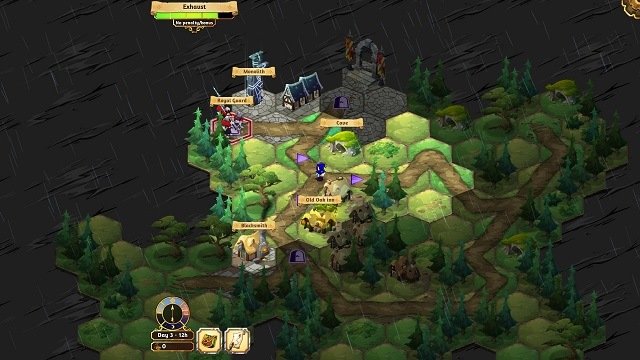 For the events that involve combat the hero and any mercenaries that you’ve hired will be placed on a hexagonal battle screen with your enemies (such as wolves and bears in the early stages) where a turn based tactical battle begins. In these battles each of your allies will have two turns (with kills recovering a turn) that you can use to move, attack and activate skills unique to that character with the ultimate objective to dispatch any enemy tiles while minimising the losses of your own units.

Your hero and mercenaries which you hire during your adventure level up separately and have their own equipment which can be upgraded with materials and even socketed with runes to give them bonus benefits to create a sense of a unique party with specific strengths and weaknesses. This is where team and inventory management becomes important as you choose which heroes to give your best gear and what role you want them to fill in your team setup and use that accordingly in enemy encounters. 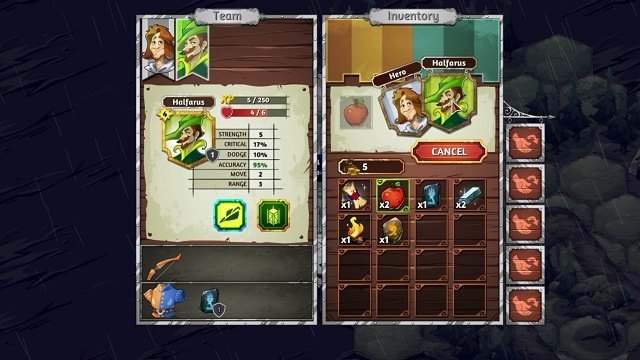 The mixture of game genres in Crowntakers proves to be extremely addicting and challenging which is a staple for rouge-lite experience and ensures on the other side of the coin that you’ll have a sense of reward and accomplishment with every small victory. Making it further than your last attempt is particularly satisfying as you slowly edge your way to the end game and ultimate victory in Crowntakers and is only let down by the early run grind that requires just a little too much time investment.

Games Finder is a Steam Curator and featured in the aggregate review scores data of MobyGames and Neoseeker.
FEATURED ON
Games Like Fire Emblem, Games Like FTL: Faster Than Light, Games Like Heroes of Might and Magic
LEAVE A REPLY Cancel Reply