Cruel Jewels is a standard three puzzle match game but comes with its own unique charm that makes it a great game for puzzle fans. The game packs in plenty of different game modes with catchy tunes and voice overs to keep you playing. 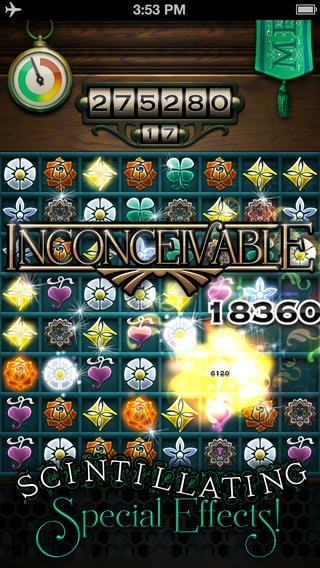 The core gameplay of Cruel Jewels doesn’t move away from the genre much, offering three match gameplay similar to most other games in the genre. Players must match up jewels of matching colours in groups of three or more on the historical and almost steampunk game board. Matched gems then disappear from the board and are replaced with new ones from the top of the screen.

So why should you be playing Cruel Jewels over one of the many other match games on the App Store? Firstly, Cruel Jewels offers an artistic style and atmosphere that is very unique and adds a lot to the overall experience. Secondly and most importantly is the impressive list of game modes that you can participate in which means you are never short on choice. Game modes include:

Classico: A continuous game mode where players tackle a mixture of game modes with battles against increasingly difficult opponents thrown into the mix. Players can choose to play on placid, tricky or cruel difficulties.

Continuum: An endless mode where you can match jewels for as long as you like.

One Hot Minute: A game mode where you have only a minute to see how much of a score you can achieve.

Fisticuffs: A versus mode where you’ll fight against AI opponents. You take turns on the same game board with matches of four or more jewels giving you an extra turn.

Pass ‘N’ Play: Same as the versus mode listed above except against a human opponent where you’ll pass your device between each other. 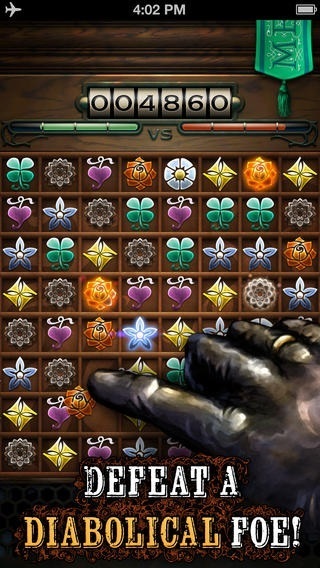 With all the game modes and difficultly levels available on Cruel Jewels it’s easy to consider it one of the best in the genre.