Crusaders of the Lost Idols aims to be more than just your average clicker game with a nice amount of depth and strategy that will constantly keep bringing you back to farm gold and defeat bosses. 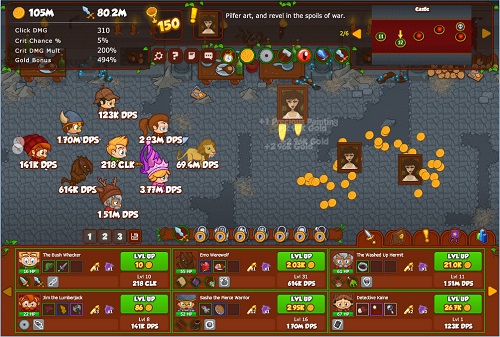 Crusaders of the Lost Idols is easily one of the most deep idol games around with plenty of RPG like features built into the core gameplay. In this idle game players will recruit heroes and tap the screen to deal damage to enemies that will appear from the right hand side of the screen. These enemies will drop gold which can in turn be used to upgrade heroes, recruit new ones or upgrade your clicking power instead.

The game is split into individual levels with every fifth level having players face a very powerful boss. In order to pass each level players must collect loot drops from the enemies which vary from finding 1 rare drop to a dozen common drops. Once collected players can choose to advance forward to the next map or farm the level further.

Advancing forward is often the better option until players hit a wall of difficultly they can’t overcome. This is due to the constantly increasing gold rewards per level and the treasure chests drop by bosses which unlock boosts, equipment and large gold rewards.

Where the strategy of Crusaders of the Lost Idols is hidden is in how you place your characters on the game board as players are limited to only 10 heroes active at one time. Unlike other games where you’ll want to use the strongest option Crusaders of the Lost Idols encourages you to think more about strategy by giving each hero an individual strength. For example Sasha The Fierce Warrior will boost damage 40% by every hero behind her while characters like Khouri the Witch Doctor can heal characters in front of them. 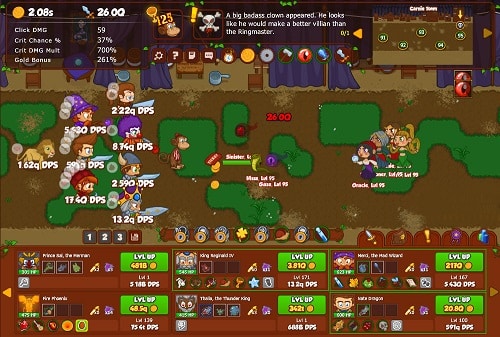 Mixing all these unique hero traits is key to success and can be easily changed depending on your current goal (farm gold, maximum DPS, etc). Similar to other games this progress continues even when you aren’t playing so switching to a gold farm setup before logging out for maximum efficiency is encouraged. Crusaders of the Lost Idols allows saved formations to facilitate this.

Crusaders of the Lost Idols will have you hooked as you upgrade, optimise and defeat bosses for powerful boosts.

Crusaders of the Lost Idols