The first battle royale game of its kind Cuisine Royale combines the typical experience of the genre with a host of kitchenware and food to be discovered, looted and equipped. Intended as a joke by the developers of the upcoming World War II shooter Enlisted the game quickly gained traction and a reasonable community that warranted it’s own development process.

Thankfully though due to the similar themes to their planned title Cuisine Royale started from a solid foundation of shooting mechanics and visuals which help it shake the Early Access tag somewhat. Most notably is in the character movement and the weapon department which are World War II inspired with the likes of the Kar98k, Mosin Nagant, M1 Garand, Luger, Thompson and countless others. In total you’ll find around two dozen weapons across melee, rifle, pistol, shotgun, grenades, submachine gun and light machine gun categories. 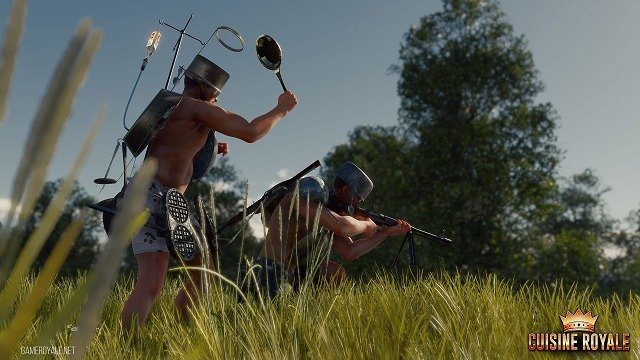 Similar to titles such as PUBG you’ll be able to equip two of these primary weapons at any time along with a pistol and a backup melee weapon for when you exhaust all of your available ammo. Bags help offset the chance of this happening somewhat and allow you to store your loot or food and come in three different varieties.

Even with a bag though inventory management is still a strategic exercise in Cuisine Royale with accessories that boost health, improve accuracy, aid health regeneration, increase run speed, allow players to hold their breath longer, increase jump height or protect against the storm available. While players will undoubtedly have their favourite items you’ll often have more success adjusting to the game scenario with plenty of tough decisions as you can only equip 2 at a time. Another unique addition is little minions which show players using the third person camera angle to prevent any advantage given and ensure those players who prefer first person know who is watching them. 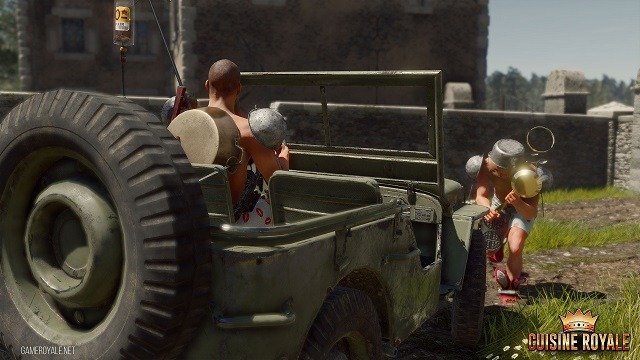 In addition to the unique accessories mechanic Cuisine Royale has a kitchen theme that is persistent across healing items (food) and all armour pieces to cover your head, body, shoulder and legs with all manner of pots, pans and everything in between. You’ll find no traditional armour pieces at all in Cuisine Royale but instead find a well stocked kitchen table and drawers to be the gold at the end of the rainbow you’re seeking instead.

Brushing the kitchenware themed elements aside your game experience in Cuisine Royale will be similar to that of related titles with a circle of darkness closing in on players at random which threatens damage (and death) to anybody that stays within it for extended periods of time. To help you outrun this encroaching death circle you’ll have several vehicles that you can jump into and drive across the game map. Cuisine Royale offers the usual array of game modes with solo, duo and squad at your disposal to queue into alone or with friends. 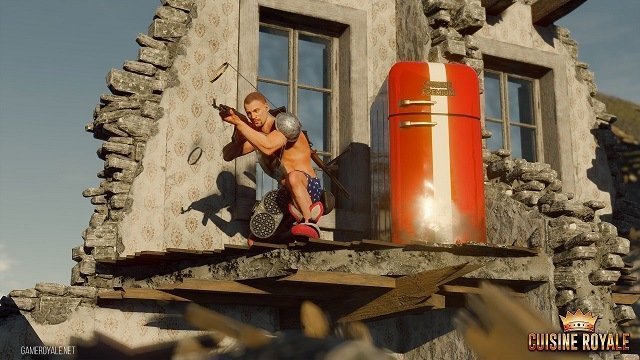 Cuisine Royale also includes longer term challenges that unlock a range of cosmetic clothing, minions and weapon skins to keep you coming back. Continuing on its kitchen theme players can also combine ingredients they find through gameplay to create some of these cosmetic items.

Ultimately Cuisine Royale has far exceeded it’s original intention and while the game is at risk of receiving split attention from it’s developer it has so far been able to hold it’s community interest and that of the developer. The wacky kitchen theme in particular helps the game stand out against a backdrop of countless copycats in recent years and will hopefully ensure the Cuisine Royale maintains an audience for some time to come.

Games Finder is a Steam Curator and featured in the aggregate review scores data of MobyGames and Neoseeker.
FEATURED ON
Games Like Fortnite, Games Like PlayerUnknown's Battlegrounds
1 COMMENTS
LEAVE A REPLY Cancel Reply