Battle stress and monsters in Darkest Dungeon, a roguelike dungeon crawler with a dark setting. Manage your roster of heroes as you explore the depths of a gothic mansion while paying close attention to the building stress level of your adventurers. 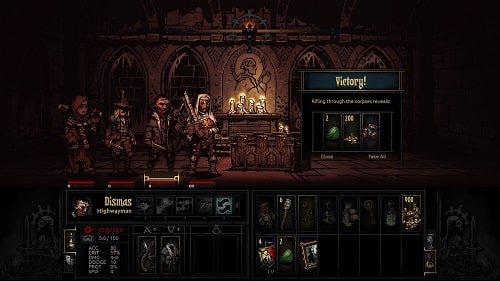 In terms of plot the game begins with players inheriting an estate from a relative who had planned to excavate underneath for fame and fortune. Unfortunately instead this relative unearthed something much darker, releasing plenty of evil creatures out into the world. After taking his life and avoiding the consequences this estate passes onto the player. Facing this threat players will recruit a band of heroes to venture deep into the manor and the surrounding area to squash the evil at the source.

In addition to adventuring players control a number of buildings on the estate which are mostly used to rid your hero roster of stress, improve their fighting skills and cure them from any diseases that they pick up along the way.

Each hero belongs to one of the available classes of which there are more than a dozen. You’ve got the usual affair of archetypes but Darkest Dungeon also has some more unique offerings such as the jester and leper. In each dungeon run you’ll pick four of your recruited heroes to adventure forward for experience and funds to invest back into improving them or the estate.

With your four heroes selected (and arranged in a strategic order) you can adventure forward into one of the available areas. An important mechanic before this adventure starts is the allocation of provisions where players take along items like food, torches, herbs and shovels.

Once in your selected area players heroes will walk through the environment and in turn encounter graves, traps, enemies, secrets and many other random encounters. All of these can generally turn out well if players are prepared but can easily go the other way and leave heroes hurt.

When enemies are encountered a turn based battle screen begins with players commanding their heroes individually to attack a selected enemy or heal/buff your own heroes using the wide selection of skills all of which have some randomness to their damage and success. 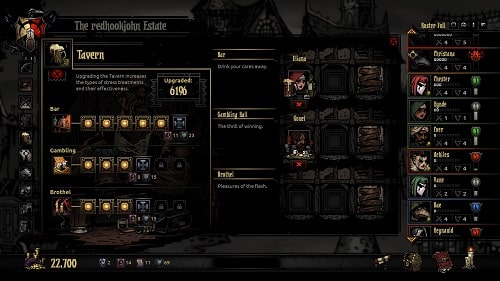 Enemies are equally skilful though and can inflict both great pain and confusion as they shuffle your team around or poison and stun them instead. All of these attacks and other elements of the environment can quickly build up stress in your heroes and reduce their effectiveness. Each of these actions is narrated and represented in a unique manner visually to add to the darkened atmosphere.

Darkest Dungeon’s interesting use of stress as a primary mechanic and the permanent death of your heroes creates a uniquely satisfying risk and reward.

Games Finder is a Steam Curator and featured in the aggregate review scores data of MobyGames and Neoseeker.
FEATURED ON
Games Like FTL: Faster Than Light, Games Like This War of Mine
LEAVE A REPLY Cancel Reply