DEFCON is a RTS title that looks into a potentially dark future with the world at large scale nuclear war and throws you into the middle of it all with a mission for your country survival. Drawing heavily from the Cold War era this game title is just as much about the psychological warfare than the missiles that fly around the globe at your enemies. 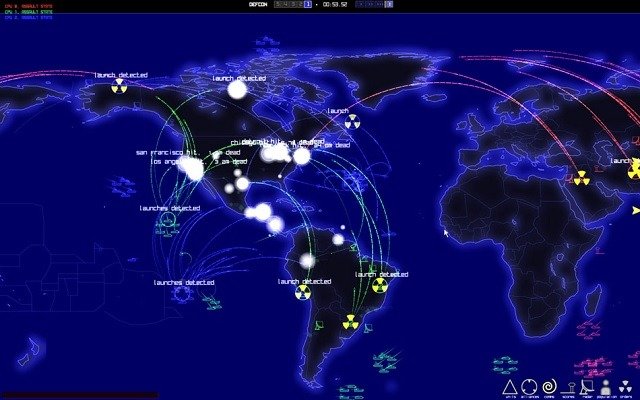 Playing as a General in the safety of your underground bunker in DEFCON you’ll command your countries defences and silos as you try to wipe your enemies from the planet. While a darker theme this requires players to attack the population of opposing nations while defending their own from incoming mission attacks. “Winning” is settled based on one of three scoring schemes that rewards points based on things like kills and survivals amongst your own population.

Your game board for this nuclear tactics title is an old style computer world map which displays all the necessary game information for your strategy needs. This globe is split into six territories which by default have the same population numbers to make them comparable between each other and setup a fair position for all nations. 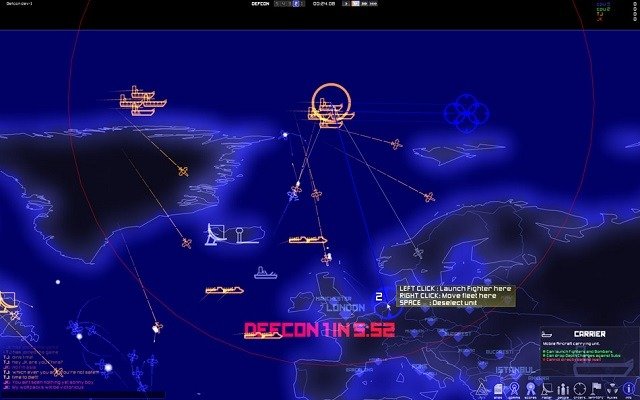 Unlike traditional real time strategy titles DEFCON does not feature the standard resource collection or tech trees, instead opting for a game focused around placement of forces and weighing up the pros and cons of launching attacks. To help build the tension though and make games last 20-30mins (depending on the speed setting) the game utilises the DEFCON levels which impact your available moves based on the level.

By starting at DEFCON 5 where your options are limited to placing your units and moving to DEFCON 1 where all out nuclear war has been approved your strategy has to consider closely what options the new DEFCON threat level brings. In DEFCON 4 for example you’ll be focused on using your available radar systems to scout your enemy with DEFCON 3 signalling the start of war activities as players launch bomber attacks and submarines. As the game progresses to DECON 2 you’re options don’t change materially although does allow you to prepare for the final DEFCON shift and the open nuclear war stage. Ultimately with decreasing DEFCON threat levels players will have additional ways to use their available units (ground, air and water) in increasingly aggressive ways. 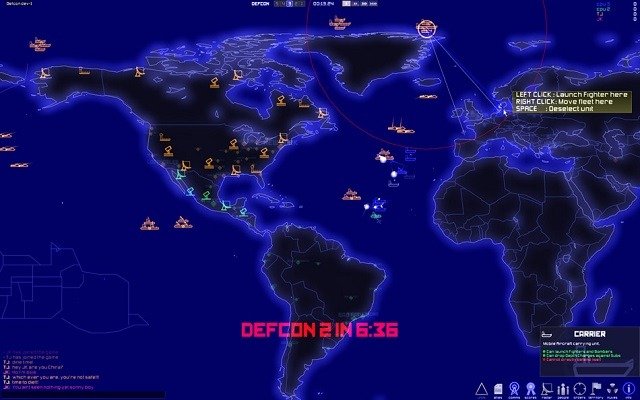 These units are small in overall number although some do have multiple modes that can take a few minutes to switch between. On the ground you’ve got the likes of radar dishes to give you line of sight, silos with defensive and offensive options and air bases for launching your air units made up of fighters and bombers. Finally in the sea you’ll be able to create fleets of carriers, battleships and submarines for reconnaissance and protection. While the message that DEFCON depicts through its gameplay is a dark one the atmosphere and strategy that the game creates make it an impressive world ending strategy title.