Despicable Me: Minion Rush combines quality endless running with movie themed minions to offer a good mobile experience with easier gameplay than most other alternatives in this genre. 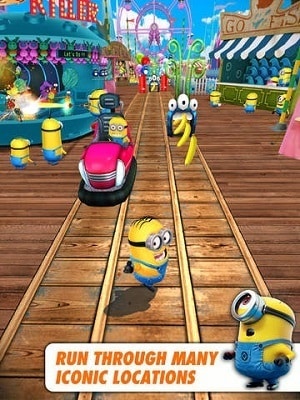 Staying true to the movie in terms of overall vibe this is one that younger fans of the movie will particularly enjoy (although it’s definitely recommended to turn off in app purchases before doing so). Unlike more traditional endless runners Minion Rush splits the game up into levels that each have their own objective from reaching a certain distance to collecting a certain amount of in game currency. For completing these players will obtain a fruit which can unlock more levels and extra zones.

The game leans to the easier end of the difficultly spectrum so there isn’t a huge challenge for regular endless runners but this will suit the intended target audience just fine. This easier difficultly is mostly achieved through a slower game pace and limited the number of obstacles on the screen at any one time.

Despicable Me: Minion Rush features the same controls you would have seen before with swiping side to side, up and down depending on the action required to navigate around the oncoming obstacles. The game also throws in a number of tilt moments and even brief side-scrolling although these only ever last 10 or 20 seconds.

Despicable Me: Minion Rush uses the standard two currency setup of freemium titles with tokens playing the premium currency role with bananas being the currency that you’ll collect during each game. While both of these can be used for various in game items tokens clearly have the advantage with many of the more interesting costumes limited solely to tokens. 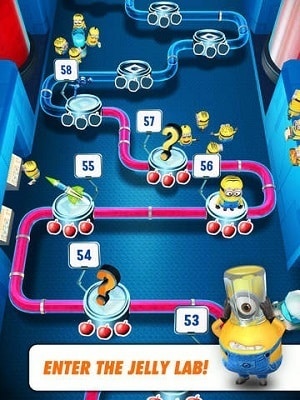 Bananas aren’t completely useless though with their ability to unlock special items such as the minion shield, banana vacuum, mega minion and many other helpful items.

Despicable Me: Minion Rush is the perfect past time for movie fans or younger gamers that want a directed endless runner that leans towards the easier side in terms of gameplay.